KPR Presents: Where It Hurts/Marshall-Bollier Debate

November 1, 2020: What happens to a Kansas town when its only hospital closes? It's chapter one of "Where It Hurts: No Mercy," which explores the closing of Mercy Hospital and how it affects the health care, economy, and sense of community in Fort Scott. It's the first in a seven-part series from investigative reporter Sarah Jane Tribble of Kaiser Health News. Also, the final debate between Democrat Barbara Bollier and Republican Roger Marshall as they vie for Kansas' open U.S. Senate seat.

Listen to KPR Presents on KPR1:

Listen to KPR Presents on KPR2: 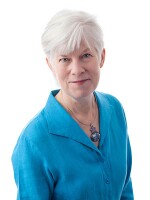 Kaye McIntyre
Kaye starts her weekends the same way you do: with Weekend Edition Saturday, Wait Wait Don't Tell Me, This American Life, and To the Best of Our Knowledge. She started at Kansas Public Radio in 2001; in 2006, she became the producer of our weekly public affairs program, KPR Presents. In her spare time, she loves to read, travel, and attend theater.
See stories by Kaye McIntyre