MANHATTAN, Kan. (KNS) — The prairie of the Great Plains evokes a certain image: A vast expanse of grasses stretching as far as the horizon.

And you can see plenty of those grasses swaying in the breeze along Interstate 70 through the Flint Hills.

But take a tour sometime of land grazed by bison and you’ll see a strikingly different landscape.

The sheer variety and numbers of wildflowers that grace the hills near Manhattan where scientists reintroduced these massive grazers more than three decades ago creates a parade of ever-changing blooms from spring through fall. Even the grasses are more varied here.

The scene is distinct from what you see looking out over a swath of ungrazed tallgrass. It’s even different from cattle-grazed prairie.

Put simply, the wider range of plants on grazed land could help as a shifting climate brings higher temperatures and more severe droughts and downpours — changes that are all projected for Kansas.

As some plant species languish or even disappear, others in a richly diverse ecosystem could expand to fill gaps in the food chain.

“It’s something we can call either the ‘portfolio effect’ or an ‘insurance effect,’” biology professor Zak Ratajczak said. “By having a broader portfolio, the chance that we have one of these winning species in the future gets higher.”

A rare, three-decade-long experiment at K-State highlights the keystone role of big herbivores in shaping their surroundings. The results appeared in a fall issue of the Proceedings of the National Academy of Sciences. Ratajczak is a co-author.

The findings come as no surprise to those who manage bison herds and argue for reintroducing the creatures where possible as part of broader efforts to restore healthy grasslands — and who support incentivizing cattle ranchers to raise native animals instead.

“We have to be careful in saying, ‘Just reintroduce bison and then everything will be fine,” said Gazing Wolf, a member of the Standing Rock Sioux Tribe. “Bison can be environmentally destructive if humans are mismanaging them. If I overgraze (land) with my bison, it doesn’t matter that they’re bison — it’s still poor management.”

Once one of North America’s major ecosystems — covering large swaths of the Great Plains from what is today central Texas to south-central Canada — settlers and their descendents destroyed more than 95% of the continent’s tallgrass prairie for cropland and other development. Tallgrass in the Flint Hills escaped the plow only because the region’s shallow soil and rocky layers made farming less practicable there.

Tallgrass can top 6 feet tall in the autumn. Without big herbivores around, four iconic species of grass take over the landscape — big and little bluestem, Indian grass and switchgrass. Wildflowers exist, but they’re relegated to the margins.

And this is what hikers see when they walk the Konza trails open to the public.

It’s in these areas that K-State scientists found plant diversity doubled in the presence of bison, hungry giants that can each weigh up to 1 ton and pack away 30 pounds of grass a day.

Cattle benefited biodiversity, too, they found, though not half as much as their native prairie cousins do.

In the shadow of the tallest grasses, shorter species like blue grama and buffalo grass expanded their foothold, too, forming a kind of understory of shorter plants and boosting grass diversity.

Insect populations are struggling globally, but diverse grassland with plenty of nectar-rich blossoms can feed legions of pollinators and other vital insect populations. Scores of butterfly and moth species use goldenrods as host plants for laying eggs, for example.

What accounts for the findings?

In the ungrazed research areas, four species — big and little bluestem, Indian grass and switchgrass — covered 80% to 90% of the ground. They elbowed out wildflowers with ease.

In areas grazed by cattle, this changed somewhat. The four grasses covered about 70% of the ground, opening some space for other species.

Bison reduced the four key grasses to about a quarter of the ground.

And they doubled the number of plant species that scientists counted — a 100% increase over ungrazed plots. Cattle increased the count, too, but only by about 40%.

Bison act and eat differently than cattle do, though biologists say not all the differences are clear yet. Few studies compare these two bovine herbivores side by side.

Still, a few differences jump out. The bigger species not only eats more grass, it also spends less time along streams than cattle do and more time on hilltops.

There, they create wallows, rolling over and over on the ground and leaving buffalo-sized bowls that gather rainwater and create homes for water-loving plants, dragonfly larvae, frogs, shrimp and other creatures.

The prairie as it looked centuries ago

This may shed some light on what the vast prairie looked like before it fell to the plow, but it still differs in key ways.

A few hundred years ago, historians and ecologists believe, the plains looked something like a patchwork quilt. Flying overhead, one might have seen swaths of heavily grazed grass packed with wildflowers adjacent to ungrazed areas where thick grasses choked out the blooms.

Herds of bison moved freely and coexisted with other large mammals, such as elk and pronghorn, whose distinct appetites likely shaped the flora differently. Native Americans burned parts of the landscape at intervals to ensure strong numbers of bison attracted and nourished by the nutritious young grasses that re-emerged.

Gazing Wolf wants The Nature Conservancy, which has about 2,300 bison at the Joseph H. Williams Tallgrass Prairie Preserve that it owns on Osage land, to reintroduce other large herbivores there.

“How do we prepare for the coming climate catastrophes that we’re facing?” he said. “It’s not going to be just by reintroducing buffalo.”

Gazing Wolf says plans aren’t underway for this at the Nature Conservancy property — one reason he favors tribal control of tribal lands — but that the Osage Nation is considering adding elk and pronghorn to part of its territory owned by the tribe.

The K-State paper says bison have been reintroduced to hundreds of grassland sites in recent decades.

Still, North America today has only about 350,000 bison, mostly on private land. Tens of millions wandered North America before Europeans arrived, driving them within a hair’s breadth of extinction by the late 1800s. 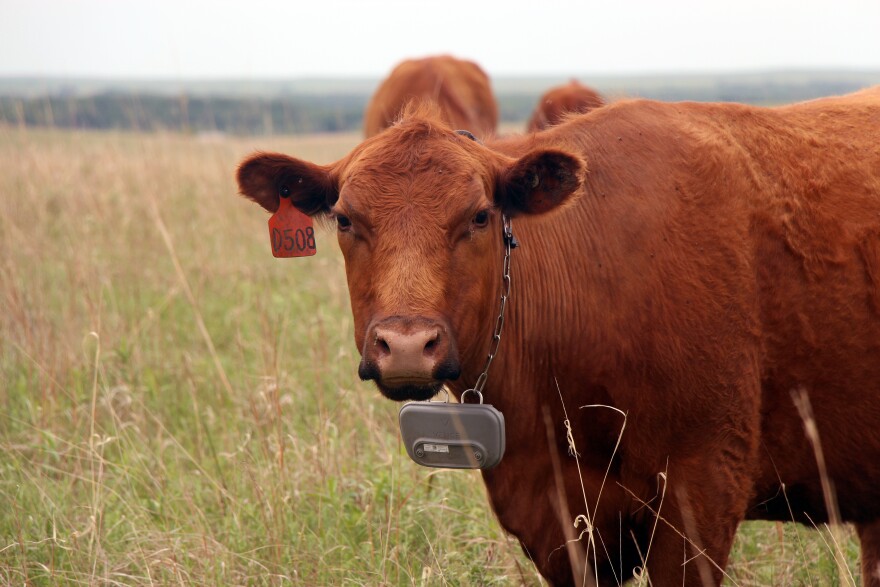 Cattle may not boost plant biodiversity on the prairie as much as bison do, but The Nature Conservancy thinks it’s possible to manage them in ways that support healthier grassland.

It’s working with a Flint Hills cattle rancher near Strong City in Kansas, along with K-State scientists, to see how fitting a herd with GPS collars might help.

The collars let researchers set up invisible fencing to mark off swaths of land in an effort to recreate that historical prairie patchwork where bird species now struggling to survive once thrived for thousands of years. This idea includes, in part, getting cattle to spend more time in the uplands and less time lounging in their favorite spots along streams.

Still, some buffalo ranchers hope to see these animals become more popular. Shirley Plumlee manages a small herd with her husband, Larry, on 400 acres of tallgrass near Alma.

“They’re very self-sufficient, they’re very intelligent,” she said. “We can go on vacation and not worry about them. They’re going to be just fine.”

The Plumlees, former cattle ranchers who made the switch and didn’t look back, have helped other families start 10 additional bison herds. They take a rather hands-off approach and let them reach slaughtering size at a natural pace, a process that Shirley said takes three years when bison eat only native grass and no grain.

In return, they get to watch the animals shape the landscape in the way K-State researchers described.

“We have three types of milkweed,” she said. “We have lots of monarchs that migrate through here. We have goldenrod … coneflowers, sunflowers. They just eat around them.”

As retirees, though, the Plumlees concede that they don’t depend on the herd to make their living.

They sell only as much meat as they want to, sending about a dozen animals for slaughter each year at a small meat locker in Frankfort. Repeat customers snap up the steaks, ground meat and summer sausage that the Plumlees sell at their home.

“Organ meats are actually very popular,” she said. “Liver. Heart. I sell the leg bones for people to make bone broth, which is very healthy.”

Plumlee offers her own caveats for people interested in tasting bison.

First, buffalo sold by grocery chains and served in restaurants can come from animals that were fed grain to speed their growth and fatten their meat, she said. The result tastes very different from an animal that lived out its life on the prairie and has almost no fat.

Second, if you track down and purchase meat from animals raised and finished on the prairie, don’t prepare it like beef. If you do, disappointment awaits. This is why Plumlee gives recipes to her customers.

“It’s tender as long as you cook it right,” she said. “And the native grass gives it an especially sweet flavor.”