Much of the Great Plains — including Kansas, Nebraska, and Oklahoma — are in a drought. Wildfires have swept across the grasslands and farmers are worried about how they’ll make it through the growing season, even with a few recent downpours. Harvest Public Media’s Elizabeth Rembert reports that the region is desperate for rain.

Scroll down for more on this story, and to see a map of drought conditions across the Great Plains.

Randy Uhrmacher is in his tractor, planting corn and soybeans in central Nebraska. But it’s hard to see his work. The soil is so dry that clouds of dust hang in the air as he drives through his fields.

“Not sure how I’m supposed to see what I’m doing tonight,” Uhrmacher said on a recent night of planting.

Even turning on the windshield wipers didn’t help him see through the dust storm. If he didn’t use soil conservation practices like reduced tillage and cover crops, he said his fields could look like something out of the 1930s Dust Bowl.

It’s the driest spring Uhrmacher can remember in his 38 years of farming.

Drought is a challenge many farmers and ranchers are facing in the middle of the country.

More than 80% of the Nebraska-Kansas-Oklahoma region is abnormally dry, according to the National Drought Mitigation Center’s most recent data. And more than half of the area is severely dry.

Brian Fuchs, a climatologist with the center, said the harsh conditions follow an extremely dry winter in much of the Plains. A winter without much precipitation wasn’t surprising. The colder La Nina weather pattern is playing out in the Pacific Ocean this year, which often brings below-average precipitation levels to the United States.

But Fuchs said the dryness has exceeded expectations.

“We’re currently seeing a tremendous amount of drought,” he said. “And it’s getting to be more intense from South Dakota, down into Nebraska, Kansas and all the way into Texas.”

Recent rainfall in the region has toned down some of the alarm bells, but Fuchs said the showers still haven’t eliminated the drought conditions that have been building since October.

“It’s been a welcome relief to farmers and has paid back some of the precipitation deficits in the region,” he said. “It will help ease dryness in some areas, but long term projections are showing that the drought is going to continue having a foothold through the summer.”

Many farmers said they’ve been worried their crops won’t have enough moisture to break above the ground.

That concern pushed Uhrmacher to do something he’d never done before: turn on his irrigation pivots to pump water through the soil before planting. He said he felt it was his only option to get moisture into the ground. He also increased his crop insurance policy to get more coverage in case crops on his non-irrigated land wilt.

“It just depends on Mother Nature from here,” Uhrmacher said. “We’re doing the best we can, but it can only be a good year if it starts raining and we get normal rains or above-normal rains for the rest of the year.”

Strong winds are also working against farmers this year. Oklahoma saw its windiest April since at least 1994. Wind speeds have also been above average in Nebraska and Kansas. 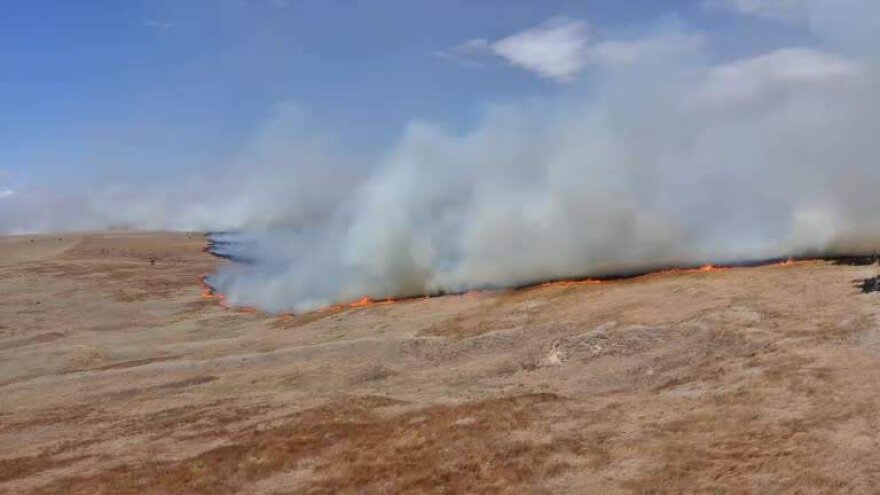 The high winds and a dry prairie have been the perfect kindling for wildfires. Steve Rice is an alfalfa farmer but has been busy as a volunteer firefighter in southwestern Nebraska. He remembers driving up to a house in late April on a road sandwiched between hundreds of burning hay bales.

“There’s a wall of fire on each side,” he said. “And we sat there in the ash, in the smoke, in the wind and everything for three hours and tried to protect the house. We did it, we saved it, but he lost all of his hay bales and feed.”

Wildfires have burned up hay and thousands of acres of grassland that ranchers rely on to feed their cattle. In response, Rice has been organizing hay donations and transporting the bales to ranchers who need help. 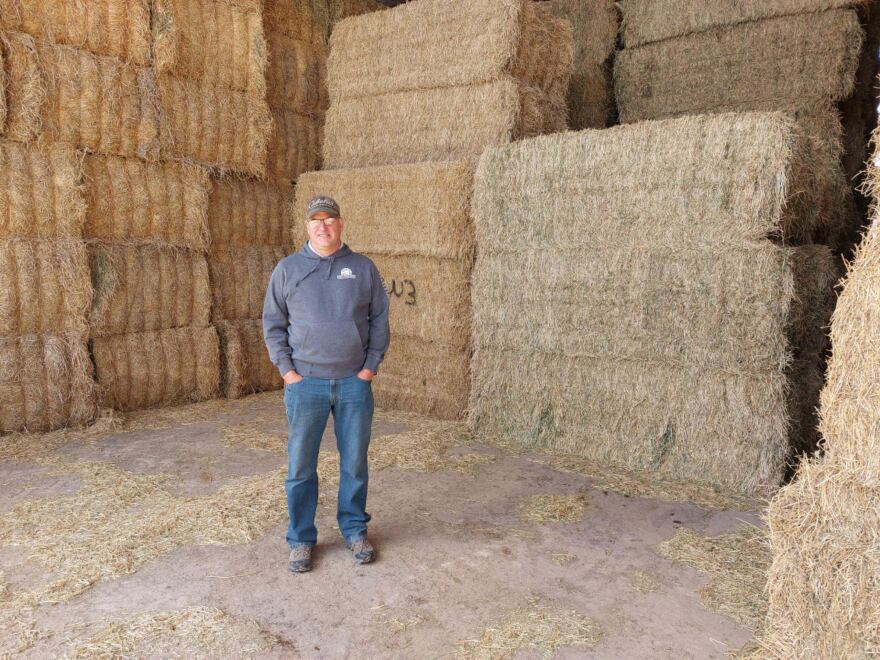 The drought means there’s not much hay and grassland, even for areas that haven’t seen wildfires. Some ranchers are considering selling off cattle because they’re worried about feeding them.

It’s reminding some farmers and ranchers of the last big drought in 2012, when farmers recorded more than $35 billion in crop losses. But Fuchs said there are some key differences between this year’s conditions and 2012.

The 2012 drought started developing from the east and spread west, unlike now, where states east of the Missouri River have generally received good precipitation. If anything, farmers in parts of Iowa, Illinois and Missouri are complaining that their soil has been too drenched for them to start planting.

And there were also almost no signals of drought in spring 2012, so it took farmers by surprise when dryness started developing in the summer.

“The first areas in the region showing drought in 2012 were Illinois, Indiana and then it kind of just exploded from there in late June, early July,” Fuchs said. “That’s not what we’re seeing this year. Temperatures have also been cooler than in 2012, which has been a saving grace.”

Droughts are a part of the natural weather cycle in the Plains, Fuchs said. So it’s not unexpected that the region would go through another dry spell a decade after its last big drought.

Yet Kansas meteorologist Chip Redmond said climate change could play a part in pushing dryness into drought. He said weather events are getting more extreme, with heavy rain flanked by long dry periods. Higher temperatures could be another contributing factor.

“It’s a slow, gradual impact,” Redmond said. “When we look at things like above-normal overnight temperatures — which has been a really common theme of climate change — we can develop drought more readily, potentially.”

The Drought Center’s research shows dry conditions persisting through the end of July. That has farmers and ranchers like Uhrmacher and Rice praying the recent rains continue.

“We’re in dire straits with the drought conditions we have right now,” Rice said. “ If Mother Nature could turn the spigot on then that could change, but right now we don’t even know if we’re going to raise a crop. We need water, we need rain.”

Harvest Public Media is a collaboration of Midwestern public media newsrooms based at KCUR in Kansas City, reporting on food systems, agriculture, and rural issues. Follow Harvest Public Media on Twitter @HarvestPM. Elizabeth Rembert reports on agriculture and is based out of Nebraska. Follow Elizabeth on Twitter @Ekrembert. Nebraska Public Media's Will Bauer contributed reporting to this story, and the Midwest Newsroom’s Daniel Wheaton analyzed data.