The University of Kansas Cancer Center landed a “comprehensive” designation from the federal government on Thursday, promising added prestige and millions in new funding.

The comprehensive cancer center designation from the National Cancer Institute comes with nearly $14 million in new research funding and will make way for more research grants for the center, along with increased visibility and status that could draw more patients and funding.

“Everyone who receives that diagnosis, that they have cancer, what they're looking for at least initially is hope,” U.S. Sen. Jerry Moran of Kansas said at a news conference announcing the new designation. “This research is providing hope in the process of finding the cure.”

In 2017, the cancer center the designation was renewed — but did not reach comprehensive status. NCI cancer centers have shown an added depth of research across multiple medical disciplines.

The Stower’s Institute for Medical Research and Children’s Mercy Hospital Kansas City are partners in the KU Cancer Center consortium.

“Having access to all the resources of the cancer center … means that those children will be exposed to the very best science and technology,” Curran said.

Dr. Roy Jensen, director of the KU Cancer Center, said that the designation is the most important thing he’s accomplished in his career. 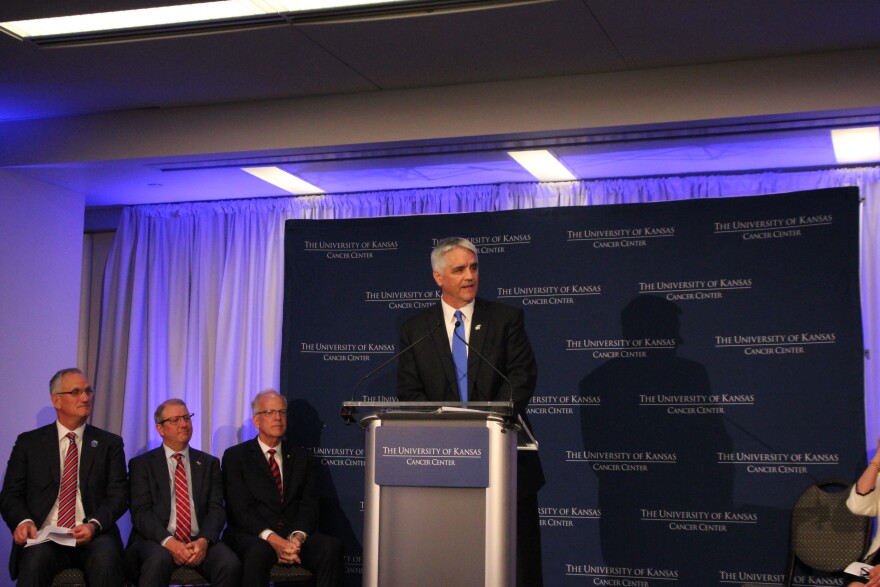 “Twenty years ago, we were told that this was a pipe dream. Our institutions weren't good enough, our leadership wasn't up to the task and we didn't have anywhere near the resources to make cancer center designation happen,” Jensen said. “Our success is a reflection of … hard work.”

In a news release, the KU center called the comprehensive designation “the gold standard for cancer centers from the National Cancer Institute.” There are 52 other such comprehensive centers in the country.

“For the 4.5 million people living in our catchment area, comprehensive status will assist us in finding better ways to prevent cancer, diagnose it earlier, accelerate treatment and clinical trial access, increase survival rates and improve overall quality of life,” the cancer center said in the press release.

The nearest comprehensive center outside Kansas City was previously in St. Louis.

“We never want a patient to have to leave Kansas City for their care and treatment. We have that ability right now,” said Tammy Peterman, president of the Kansas City division of the University of Kansas Medical Center.

Jensen said nearly 15% of cancer patients in the region left to get care when KU began working towards cancer center status nearly 20 years ago. Since then, that number dropped by half.

“People can have a great deal of assurance that they don't have to go to the coast or someplace else to have the best chance for survival and quality of life,” said Jensen. “They can come to us and get the best care available.”

He added that this designation will help bring even more specialists and researchers to the cancer center.

Savannah Hawley is a general assignment reporter for KCUR Radio in Kansas City. This story was provided as shared content by the Kansas News Service.