Kansas voters rejected a proposed state constitutional amendment Tuesday that would have stripped away the right to an abortion — marking a stand for abortion rights in a heavily Republican state in the first vote since the fall of Roe v. Wade.

The vote, for now, preserves access to abortion in Kansas and serves as a rebuke to the regional trend significantly restricting abortion access after the federal right was overturned — and that has made Kansas an abortion destination.

The U.S. Supreme Court’s ruling earlier this summer raised the stakes in Kansas and supercharged the political fight that ignited protests, contentious campaigns and a flood of out-of-state campaign money.

Supporters argued the amendment was necessary to correct what they see as the Kansas Supreme Court’s overreach by striking down some of the state’s previous abortion restrictions in 2019. Opponents contended that the amendment would set up state lawmakers to pursue a total ban like other Republican-dominated states.

The vote tally appears to depart from polling on the race. A poll conducted by the firm co/efficient and published by FiveThirtyEight showed 47% of respondents planned to support the amendment, while 43% said they would vote against it.

Additionally, the poll showed only 5% of those surveyed want a complete ban on abortion, while 43% believe there should be no government restrictions.

Republican legislators largely remained coy before the vote about how far they wanted to restrict abortion access if the amendment passed. But some feared lawmakers would follow moves in nearby states to significantly restricting abortion access.

Significant bans installed in Oklahoma and Texas over the last year led to many women from those states seeking abortions in Kansas, turning the deeply red state into an unlikely refuge for abortions. Kansas was already an abortion destination for women in western Missouri. And that state enacted a ban after the U.S. Supreme Court ruling.

But Kansas does have some of the tougher abortion restrictions in the country, including limiting abortions after 22 weeks of pregnancy to only cases where the pregnant woman’s life is in danger and the requirement of an ultrasound before a procedure. It also has a 24-hour waiting period and requires parental consent for minors. 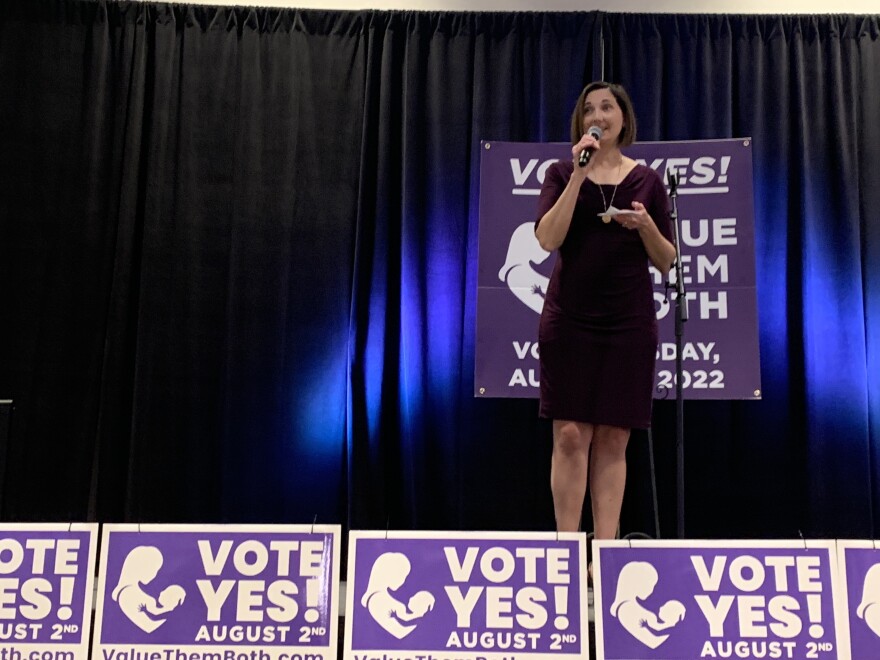 Those restrictions would have remained in place whether the amendment passed or failed. The amendment simply would give state legislators the power to put ever tighter restrictions in place — including a ban that wouldn’t have been possible without this summer's U.S. Supreme Court ruling and a change to the Kansas Constitution.

Meanwhile, Republican State Sen. Mark Steffen said he wants legislation to recognize “life starting at conception,” according to the Kansas Reflector. The Value Them Both group backing the amendment strictly avoided discussing what sort of restrictions might be put in place during the run-up to Tuesday’s vote.

The Value Them Both coalition was also mum on the topic. When pressed on the issue, spokesperson Danielle Underwood would not say what she or the coalition wanted to come next. “It doesn’t really matter what my opinion is,” Underwood said. “It matters what the opinion of the people of Kansas is.”

But least one bill banning abortion was introduced in the Kansas Legislature. Lawmakers did not act on the bill before adjourning for the rest of 2022.

Alesha Doan, an abortion policy expert at the University of Kansas, said work by abortion opponents over the last 30 years has had one goal in mind — a full-blown abortion ban in Kansas. “That’s what this amendment is designed to do,” Doan said. “And for a politician to not answer that is also disingenuous.”