People in Kansas and Missouri are struggling with a lot of medical debt. That debt is disproportionately affecting people of color and the negative effects extend beyond health care. Kansas News Service reporter Celia Llopis-Jepsen spoke with editor Stephen Koranda to explain what’s going on.

People of color in Kansas and Missouri are often saddled with medical debt. That hurts their credit and their ability to get good loans, to buy homes and a range of other things that fuel middle class wealth.

The Urban Institute crunched data from millions of credit reports across the country by ZIP code.

In both Kansas and Missouri, nearly one-third of adults in predominantly non-white ZIP codes have medical debt in collections.

That makes it twice as common in communities of color — compared to mostly white ZIP codes — to face collectors pursuing them over medical bills.

Moreover, communities of color in Kansas and Missouri struggle much more than people in neighborhoods with similar demographics in other states.

Economist Signe-Mary McKernan says ample research has shown that expanding access to Medicaid helps keep people from sinking into financial woes over something as basic as health care.

The stakes are high, she said, not just for health but for other aspects of our lives. Getting a mortgage or a small business loan becomes harder.

Missouri voters adopted Medicaid expansion through a 2020 ballot measure. The state started processing applications less than a year ago, so the impact on preventing medical debt is not yet clear.

Kansas is one of a dozen states that have not expanded Medicaid. The Republican-led Legislature voted to do so in 2017, but Republican Gov. Sam Brownback vetoed the move.

In Kansas, people in communities of color are three times as likely as those in mostly white areas to lack any form of health insurance. 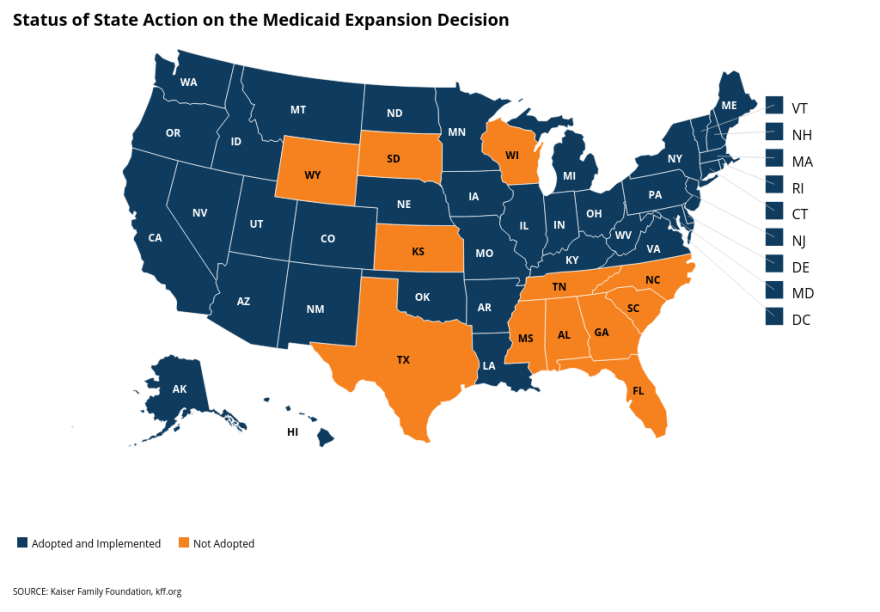 Though hospitals and doctors complain that Medicaid doesn’t pay them enough, they generally support expanding Medicaid coverage to cut down on the number of uninsured, low-income people seeking care.

The Urban Institute report comes on the heels of a separate study by the University of Arizona College of Law and the University of Utah School of Business that found weak consumer protections for people facing medical bills in Kansas and Missouri.

Both got low marks for a variety of policies that the researchers said shield people against unaffordable care or else clarify their rights when bills pile up.

Those policies ranged from expanding Medicaid coverage, in the case of Kansas, to codifying rules for hospitals and collectors.

For example, neither state makes clear how long hospitals must wait before hauling patients to court over unpaid bills. Kansas and Missouri also don’t require hospitals to tell people about charity care for low-income people.

"People don't choose when or where they're going to get sick," said Gabriela Elizondo-Craig, a postgraduate fellow at the University of Arizona College of Law. "They don't generally get to price shop the way you would with any other consumer debt."

Two-thirds of debt collection lawsuits in the U.S. stem from medical bills, the report said, meaning that state-level consumer protections could impact millions of lives.

The analysis of debt by ZIP code offers new insight into well-documented health disparities in Kansas and Missouri.

Babies are more likely to be born with a low birth weight and people are on the whole more likely to die prematurely in historically redlined and low-income Wyandotte County, for example, than the rest of Kansas.

Meanwhile, other research released this year revealed that even people with health insurance in Kansas and Missouri face increasing financial hardships.

Companies struggle to negotiate with health care providers and insurance companies, and they pass more of the cost to their employees each year.

The Fund found that Kansas families with work-based insurance pay 36% of the premiums themselves, compared to 33% for Missouri families and 29% across the U.S.

The Kansas Health Institute says premiums in Kansas for private sector, work-based insurance rose at twice the pace of inflation from 2010 to 2020. The institute is funded by the Kansas Health Foundation, a supporter of the Kansas News Service.

The Kansas News Service is a collaboration of public radio stations, including Kansas Public Radio, KCUR, KMUW and High Plains Public Radio -- dedicated to reporting on the health and well-being of Kansans their communities and civic life.  Learn more at ksnewsservice.org.