Across the country, journalists are struggling to get public documents that involve private companies. Places like Kansas are even letting corporations black out public records. And that makes it harder to scrutinize government actions. Celia Llopis-Jepsen of the Kansas News Service reports.

In Oregon, a city is hiding from a newspaper how much of the region’s precious water Google uses to cool its servers — claiming it’s a Google trade secret. A Utah county refused to show a disability rights center its jail manuals for things such as hygiene and medical care — because the author had copyrighted them. Virginia pre-emptively promised Amazon it would redact as much as it could get away with if any citizens asked for public records involving the company — to please the retail behemoth. And in Kansas, the state lets companies unhappy about public scrutiny simply black out documents themselves.

Now emails between Kansas and one of those private firms reveal just how little the state’s lawyers pushed back when asked to hide large swaths of an audit that cost taxpayers $100,000. The audit was meant to watchdog about $160 million in prescription drug spending on state employees, though experts say it came nowhere near achieving that, despite its hefty price tag. Kansas bowed to the auditor’s wishes for secrecy, even though an attorney for the state couldn’t find anything in the report that qualified for protection from public view. “I have personally reviewed the original document,” an open-records lawyer at the Kansas Department of Administration wrote in an email this summer, “but was unable to find any information that appeared to fall under any statutory exception.”

Frank LoMonte, director of the Brechner Center for Freedom of Information, fears that governments increasingly let businesses, rather than their own laws, decide what the public can or cannot see. “This is not a Kansas problem. It’s not an Oregon problem,” he said. “It’s an everywhere problem.” Governments regularly shirk transparency laws and point to the intellectual property rights of private vendors as the reason. And in the case of Kansas, it effectively outsources the redaction process to private companies that don’t work for the public, that don’t have any legal obligation to follow open records law and that can’t be hauled before a judge for breaking it. “That’s a really dangerous business,” LoMonte said. “When you actually hand the document over and you invite people to use the black Magic Marker, they have every incentive to overuse it.”

Gov. Laura Kelly’s administration has declined or ignored half a dozen Kansas News Service requests to interview either the lawyers involved in the redaction process, Kelly herself or another person in her office who can speak to her administration’s approach to redacting public records.

In recent months, Kansas has allowed not just auditor PillarRx, but also some of the nation’s wealthiest corporations — CVS Health and UnitedHealth Group — to redact various documents related to drug spending before handing them over to the Kansas News Service. Kansas law tells state agencies to give reporters and other citizens the documents they seek within days. But in these cases, the process took weeks or months. Governments, of course, can get sued for overly redacting records — even if they acted at the behest of a private actor.

But governments see that risk as increasingly remote, experts say. Newsrooms, and in particular newspapers, have trimmed payrolls, cut back on printing and even declared bankruptcy. So what are the chances that a media outlet will shell out thousands or tens of thousands of dollars on a court battle? “If you’re sitting there in that legal counsel’s office or a state agency, you’re sizing up your risks,” LoMonte said. “You probably figure that, ‘I’m much more likely to get sued by a giant, multinational drug conglomerate than I am by a local radio station.’”

In the case of the PillarRx report — which is an audit of CVS’ pharmacy benefit work for the state of Kansas — the state allowed the auditor to black out whole paragraphs, charts and even entire pages. But the redactions were poorly done, and many of the blacked-out portions remained accessible as a result. 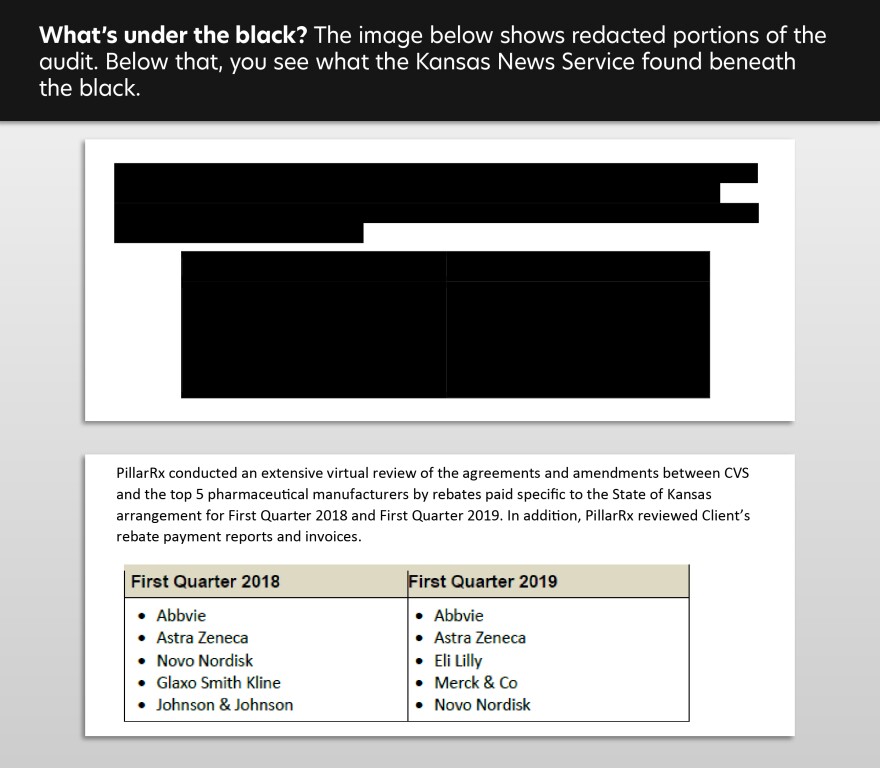 That’s how the Kansas News Service was able to report on the content, which one independent lawyer after another has concluded contains bread-and-butter public information.

Facts as simple as how many prescription drugs Kansas employees picked up in 2018 got the black-marker treatment. So did sample sizes and other audit details critical to understanding whether PillarRx did a good job policing CVS’ charges to the Kansas employee health plan. Weirdly, many of the blacked-out details — such as dispensing fees that Kansas pays to pharmacies — actually appear in other publicly released documents, some even on the state’s own website. Yet the state claimed the blacked-out details were privileged trade secrets. “I’m confident,” lawyer Bernie Rhodes said, “that there are zero trade secrets in this report.” Rhodes heads a national team of media lawyers for the law firm Lathrop GPM.

What the emails reveal

The Kelly administration won’t allow the Kansas News Service to interview its lawyers about the redactions. But state emails obtained through another open records request shed light on what happened. On August 11, the Kansas News Service asked for the audit. That triggered concerns at the Department of Administration because PillarRx had written the words “confidential and proprietary” on its report. The agency’s open records lawyer, Tanner Asbury, reached out to the contractor responsible for hiring subcontractor PillarRx. Asbury immediately suggested the option of blacking out content, even though redaction should be a last resort under state law. “If PillarRx does not wish to provide the record in its entirety,” he wrote, “is there a redacted version that could be provided instead?” On August 27, PillarRx provided such a version.

When Asbury opened the document, he balked at what he saw: A sea of black. “Could you please explain your reasoning?” he wrote back. “It appears as though all substantive portions of the document have been removed. The document we have received is essentially just the Table of Contents and Headings.” “I have personally reviewed the original document but was unable to find any information that appeared to fall under any statutory exception,” he added. But the open records lawyer signaled that Kansas remained open to redacting. "My fellow legal counsel and I feel that this record should be open to the public to some extent,” Asbury wrote, “but the redacted copy provided has too much information removed.”

PillarRx said that it needed to shield pharmaceutical pricing and audit methods from public view. It said it signed a nondisclosure agreement with pharmacy giant CVS — the very company it had been hired to watchdog. So when it provided a second redacted version on Sept. 1, large swaths remained black, though less than before. “It’s true that we tend to error (sic) on the side of being ultraconservative,” PillarRx wrote to Asbury. “The PillarRx team has taken the opportunity to review and ultimately revise the extent of the redaction in a manner that will hopefully be an acceptable compromise.” Kansas approved the compromise.

Nowhere in the emails does PillarRx claim its report contains any trade secrets — only details that are proprietary and confidential. “There’s a huge difference,” said Rhodes, at Lathrop GPM. “There is no exception in the Kansas Open Records Act for proprietary or confidential information … There’s no privilege for that.” But Kansas had to “shoehorn” the redactions into some provision of law, he said, and so it told the Kansas News Service the redactions protected trade secrets, which can enjoy a privilege that doesn’t apply to merely proprietary and confidential information.

What about the nondisclosure agreement PillarRx cited? “So what?” Rhodes said. “It’s absurd to claim that a nondisclosure agreement prevents (Kansas) from complying with the Kansas Open Records Act.” Governments that wrongly hide behind such agreements can face repercussions. That happened in Missouri in 2015, when a local government near St. Louis refused to reveal how much it paid out for a personal injury settlement, because the settlement included a nondisclosure clause. The courts forced the release and awarded the plaintiff, a local resident, attorney fees.

Rhodes considers the PillarRx situation even more baffling given public statements by the Kansas Department of Administration’s chief legal counsel, John Yeary. In October, after the Kansas News Service published its story about the redacted audit, Yeary faced questioning by Kansas Insurance Commissioner Vicki Schmidt at a public meeting. Schmidt is an independently elected official — not a part of the Department of Administration — but has oversight duties related to the state health plan. She sharply criticized the decision to black out public information. “Do you stand by what was redacted?” she asked of Yeary. “I won’t say I completely 100% agree with PillarRx on what they view as a trade secret or proprietary and confidential,” Yeary replied. “I do feel like, that our approach in responding as an agency where there are interests on both sides was appropriate.” That floored Rhodes. “I don’t understand how you can believe you did the right thing if you don’t share the view that it’s a trade secret,” he said. “I don’t see how you can possibly agree with withholding it.”

The state’s duty to the public

The state has to carefully scrutinize any assertions by a private company that public records can’t be released, said Lyndon Vix, a Wichita media lawyer at law firm Fleeson Gooing. Vix recently helped the Wichita Eagle get police body camera footage that the city of Wichita refused to hand over. Even though Wichita’s violation of state law was so egregious that the court ultimately ordered the city to pay Vix’s fees, the court battle took three years. "We have case law in Kansas that specifically says that not all confidential information is a trade secret,” he said. “An audit takes information from sources and does an analysis and then reaches conclusions. And I have never heard of that type of process being classified as a trade secret.”

Trade secrets must be secret, first of all. So blacked-out audit details that were easily available through other public documents don’t qualify. Trade secrets have to be economically valuable in and of themselves, too. They need to be something vitally important to hide from competitors. 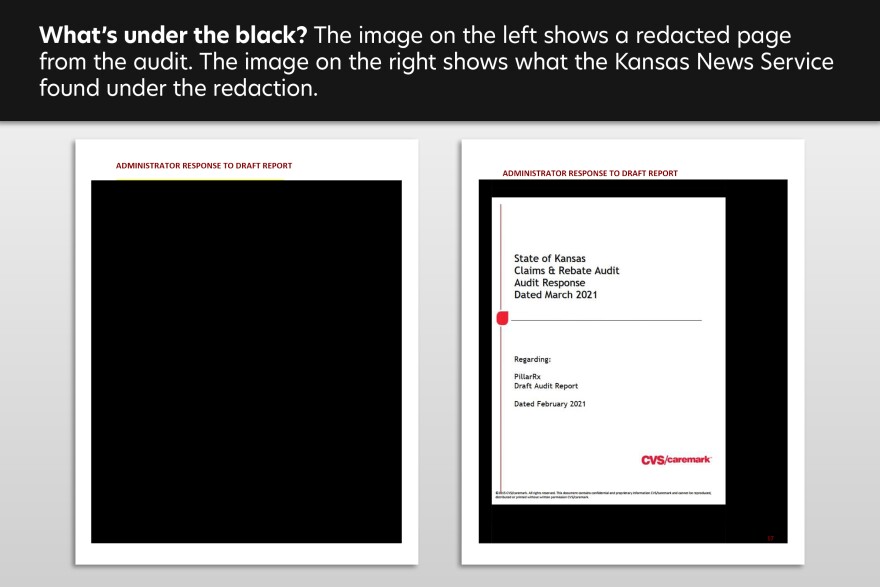 “It’s not like we’re dealing here with, you know, Pfizer’s formula for their vaccine or something,” he said. “These are (audit) numbers. So to convert them into ‘trade secrets’ … is more of a process than just saying, ‘This is confidential stuff.’”

Kansas should have insisted to PillarRx that its redactions must fit the Kansas definition of trade secrets, Vix said, and should have demanded to know whether and why PillarRx felt they did.“It’s going to be very hard, I’m sure, for a lot of this information to fall within that definition,” he said, “because it is a fairly stringent definition.” Yet the more Kansas and other governments help businesses dodge open records requests, lawyers say, the worse off the public will be. “Government can’t just rubber-stamp a third-party’s request to label all its data a trade secret. That’s not how public records laws work,” said Gunita Singh, a lawyer for The Reporters Committee for Freedom of the Press. “If that were how it worked, transparency would fly out the window. The public would lose out on critical information about government spending,” she said, “and other insights into how government and business are prioritizing—or sabotaging—our well-being.”