A federal magistrate judge in Topeka released former Kansas City, Kansas, police detective Roger Golubski to home detention Monday, finding that prosecutors had not met their burden that he represents a danger to the community.

U.S. Magistrate Judge Rachel E. Schwartz made the finding even as she acknowledged that the indictment of Golubski contained “allegations of reprehensible conduct.”

"The underlying facts (of the case) are, quite frankly, shocking," she said.

Schwartz said Golubski’s poor health conditions — including Type 1 diabetes and renal failure — meant that he could no longer threaten or harass the women he’s accused of assaulting and raping.

Prosecutors had urged Schwartz to keep Golubski, who was indicted last week on charges of violating two women's civil rights for allegedly assaulting them more than two decades ago, in detention until trial.

Lamonte McIntyre, who was targeted by Golubski for a crime he did not commit, was sitting in the front row of the courtroom, which was packed with the families of Golubski's alleged victims. McIntyre jumped up and walked out the minute the judge issued her ruling. Other victims said they were angry and will once again fear the man who they say terrorized them for years.

"I won't be able to sleep and I have PTSD. I had a good night's sleep when they arrested him. I'm about to go on the run again," said Niko Quinn, whom Golubski forced to give false testimony in the McIntyre case.

A civil lawsuit filed in 2018 by McIntyre and his mother accused Golubski of preying on Black women by forcing himself upon them or by compromising them into providing false testimony to help him solve crimes he investigated.

McIntyre served 23 years in prison for a 1994 double homicide that was investigated by Golubski and other Kansas City, Kansas, police officers. Following an exoneration hearing in 2017, Wyandotte County District Attorney Mark Dupree Sr. declared that a "manifest injustice" had occurred and McIntyre was set free.

Outside the courtroom, McIntyre told a reporter, "They had favor on him. They showed mercy to this man. Well he didn’t show no mercy to all them victims. You know how may victims this man responsible for.”

"You're looking at the justice system again at work. It don't work the same way for everybody. It's still unbalanced," he said. "It's not equal."

Golubski's attorney, Thomas Lemon, said the allegations in the indictment were old and the government had not shown any physical evidence of the alleged crimes. He also suggested some of the victims might be just “me toos," meaning they were following others' stories.

“When there's no proof but words, that makes the job I have to do more intensive,” Lemon told Schwartz.

Golubski appeared in an orange jumpsuit. Federal marshals needed two sets of handcuffs to secure his hands behind his back. He was wearing orange plastic sandals and his ankles were also bound.

Golubski had been locked up since last Thursday, when he was arrested at his Edwardsville home. He appeared in court that day, cuffed at the wrist and ankles and still wearing the T-shirt and athletic shorts he was wearing when the FBI picked him up.

His arrest followed years of accusations that he engaged in widespread misconduct while serving with the KCKPD. Golubski joined the force in 1975 and retired in 2010.

Meanwhile, federal prosecutors said that their investigation of Golubski continues and they interviewed another victim Monday morning.

"There is a tremendous amount to add" to the indictment, Stephen Hunting, a prosecutor in the U.S. Attorney's Office in Kansas, told the court.

Noting that Schwartz had mentioned Golubski's long career in law enforcement, Hunting said he may have been in an honorable profession but "much of those 40 years were not spent in an honorable way. Mr. Golubski has terrorized a community for a long, long time." 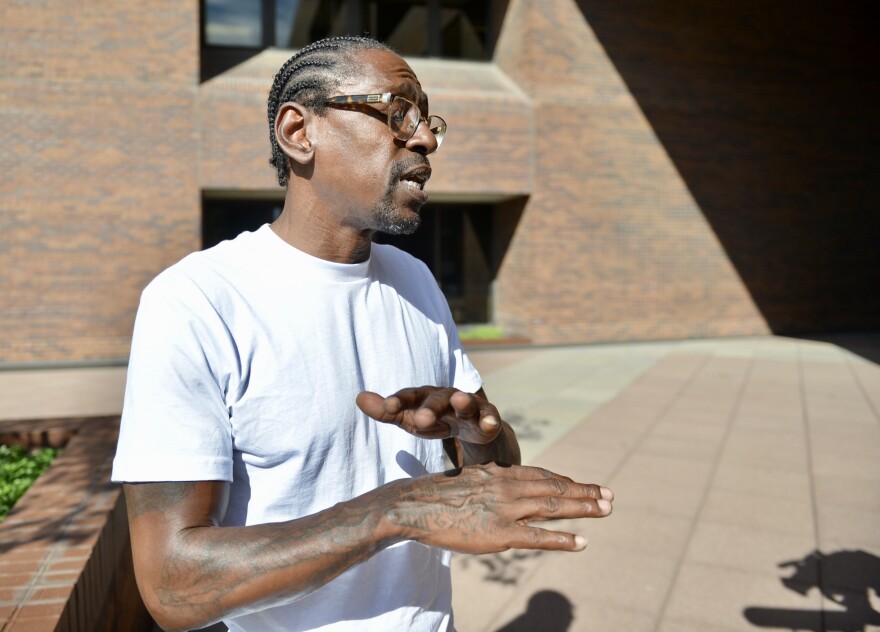 This story comes from Peggy Lowe with KCUR and Steve Vockrodt with The Midwest Newsroom. Carlos Moreno contributed to this story. This story is shared by the Kansas News Service, a collaboration of Kansas Public Radio, KCUR, KMUW and High Plains Public Radio, focused on public policy matters of interest to the region. Kansas News Service stories and photos may be republished by news media at no cost with proper attribution and a link to ksnewsservice.org.

High profile cases of sexual assault are often triggering for survivors. If you or anyone you know needs assistance, call MOCSA, the Metropolitan Organization to Counter Sexual Assault in Kansas City. The 24-hour crisis line is 816-531-0233 or 913-642-0233.

The National Sexual Assault Hotline is 1-800-656-4673, provided by RAINN, the Rape, Abuse & Incest National Network. They also have crisis support via chat: https://www.rainn.org/resources