For generations, scientists have flocked to western Kansas … to learn about the sea. As David Condos of the Kansas News Service reports, what they’re finding there could hold clues about life in long-gone oceans and about the future of life in a changing climate.

CASTLE ROCK BADLANDS, Kan. — How do you save sea turtles from climate change? Maybe start by digging around in the arid badlands of western Kansas.

Eighty million years ago, this dry, desolate landscape was completely covered by water, teeming with exotic forms of life.

And the remnants of that life — embedded in the region’s rocky outcrops — have made western Kansas a magnet for generations of scientists studying long-gone oceans. 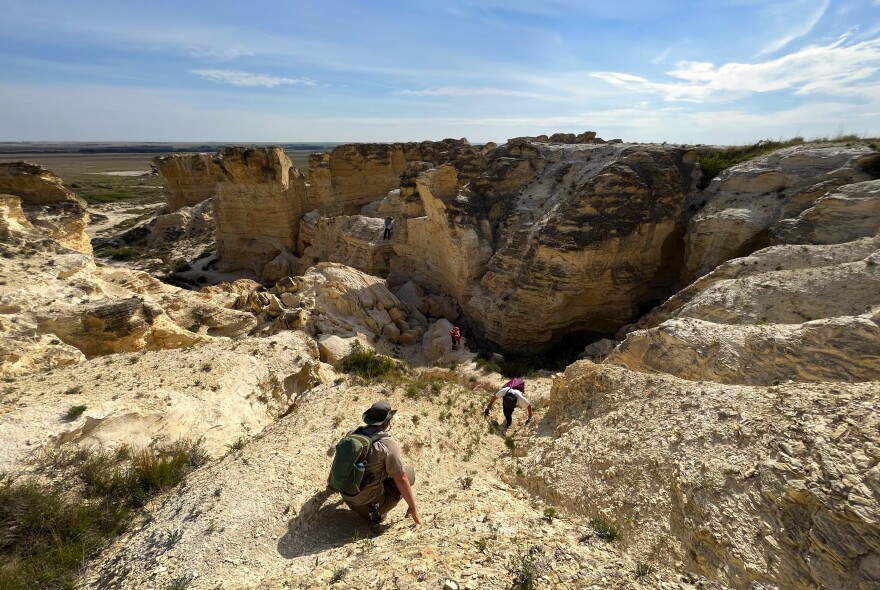 A lot has to go right for any fossil to last 80 million years.

Scientists estimate they’ve only found fossilized evidence of less than 1% of all the species that have ever lived. And most layers of sediments that settled to the bottom of prehistoric oceans are still underwater today.

So without the discoveries made possible by the badlands of western Kansas, the world might never have the chance to learn about the ecosystems that thrived beneath the ancient waves.

“If we didn't have these sediments,” Fort Hays State University paleontologist Laura Wilson said, “we would just be looking at the dinosaurs on land. And that’s only half the picture.” 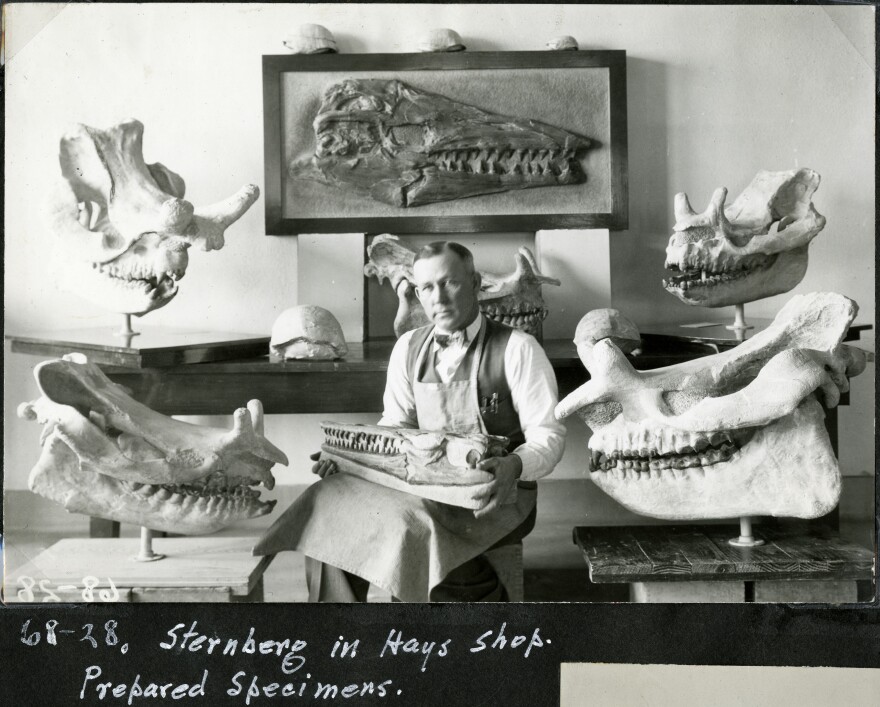 Western Kansas might hold clues for the future of ocean life, too.

Wilson is the chief curator at the Sternberg Museum of Natural History in Hays and studies how prehistoric sea turtles grew and evolved on a greenhouse planet hotter than the one we know today. Her studies of Kansas fossils could inform conservationists about how modern turtles might adapt to a warming climate.

“(Scientists are) looking to see what allowed animals to survive huge environmental disruptions,” Wilson said, “and what that could mean for biodiversity on the planet going forward.” 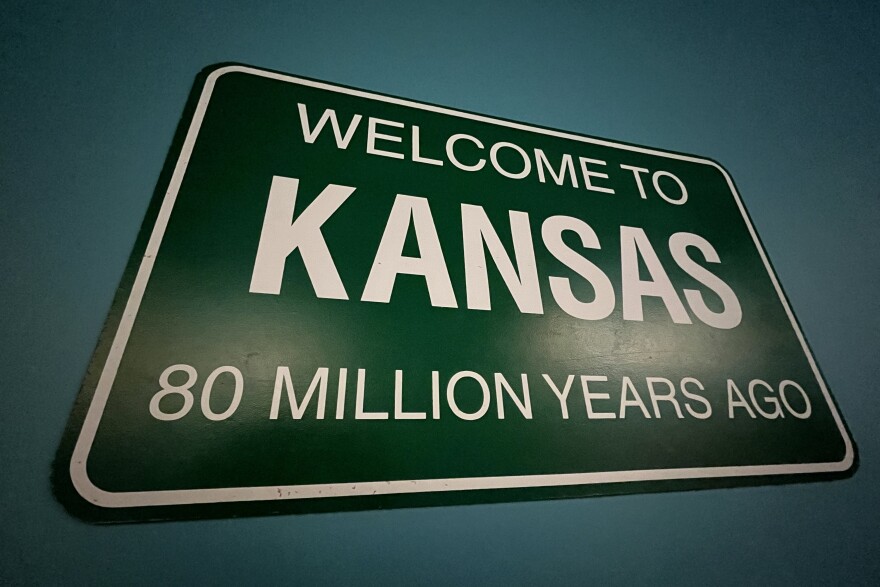 In the Cretaceous Period — it ran from about 145 million years ago to 66 million years ago — western Kansas sat beneath the waves of the Western Interior Seaway, a body of water hundreds of miles wide that split North America in half from the Arctic Ocean to the Gulf of Mexico.

It was no day at the beach. 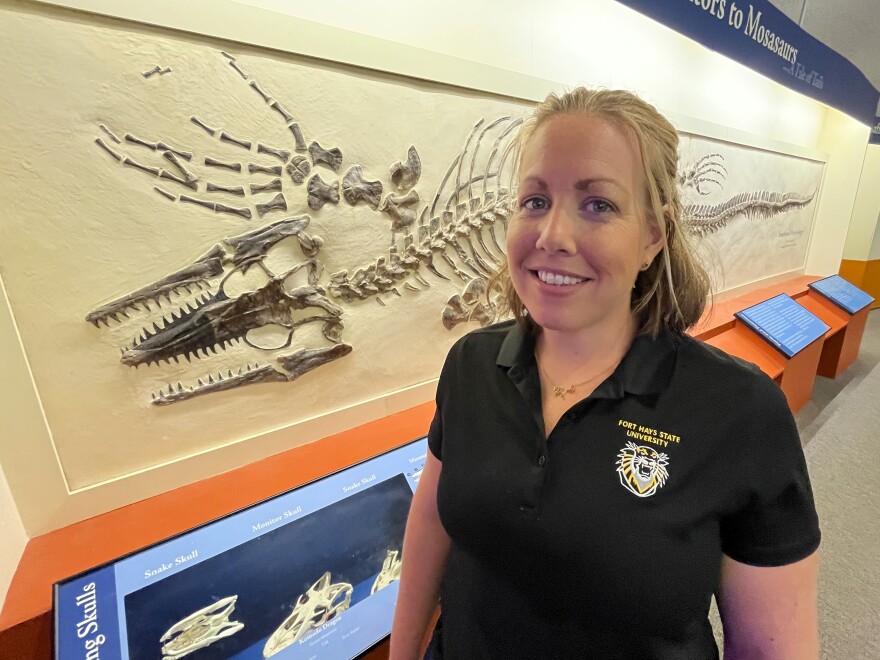 Wilson’s research on ancient sea turtles marks just the latest chapter in a surprisingly rich tradition of discovery in western Kansas that dates back to the late 1800s and has shaped our understanding of prehistoric ocean life.

From swimming mosasaurs to flying pteranodons — the two state fossils of Kansas — some of America’s biggest early paleontological discoveries happened on these plains. Specimens from these chalk beds now grace the halls of the world’s premier museums, from New York to London to Germany.

This particular corner of Kansas rose to international fame 70 years ago this summer, thanks to pioneering Hays-based paleontologist George F. Sternberg, whose family is the museum’s namesake. 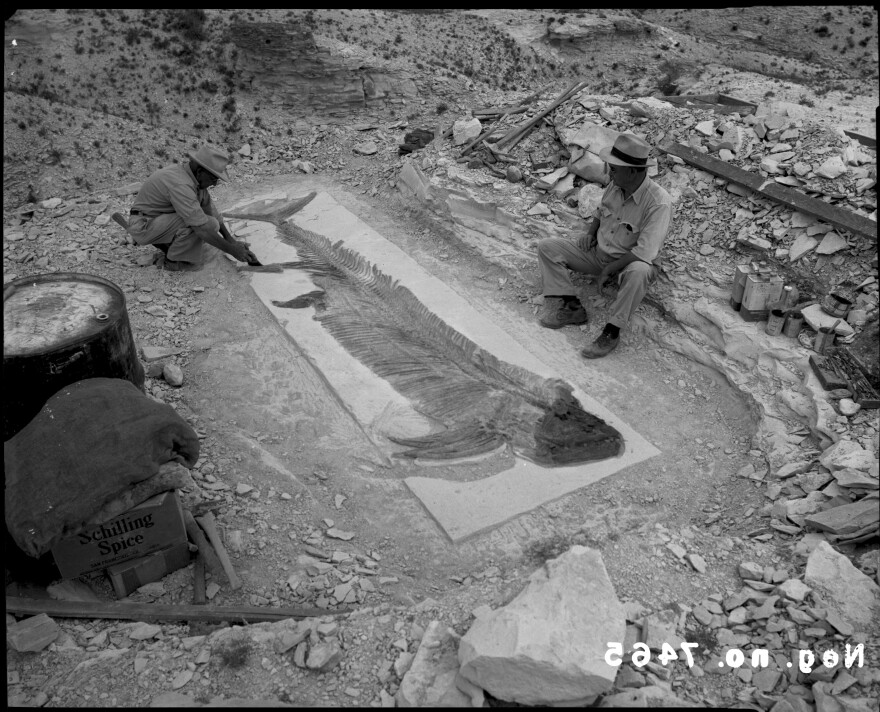 That’s when he dug up a 14-foot-long fish with a perfectly intact eight-foot-long fish in its belly, meaning it swallowed the colossal prey whole right before it died. Their intertwined skeletons are so large that they wouldn’t fit in Sternberg’s truck and had to be sawed in half.

The specimen is now known far and wide as the fish-within-a-fish. Images of the famous fossil adorn billboards, t-shirts, even the can of a new beer from the local brewery.

And today, this wall-length double-fish spectacle greets visitors as they step into the Sternberg Museum.

“This is the most photographed fossil in our collection by a longshot,” collections manager Aly Baumgartner said. “Everybody takes their picture with this.” 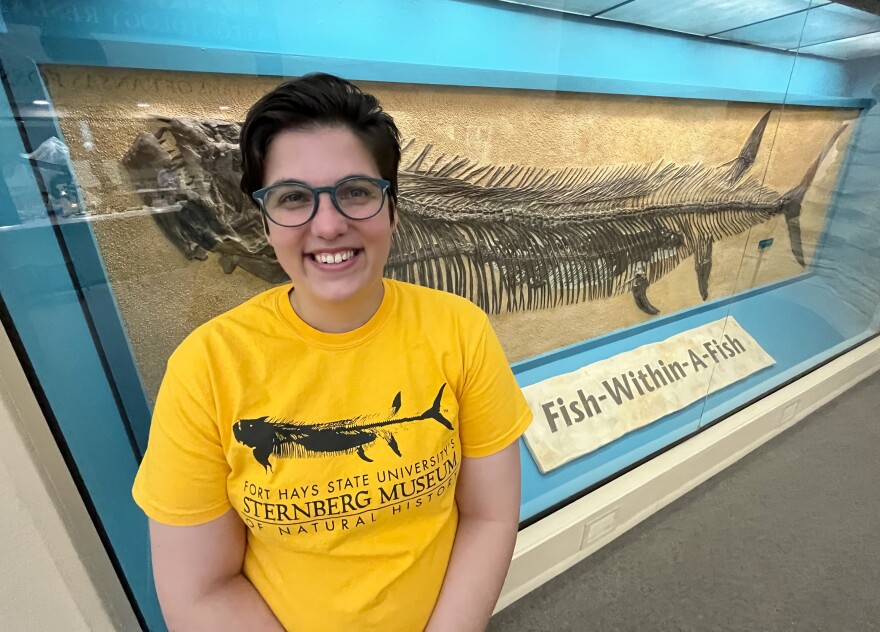 But giant monster skeletons like this one make up only a small fraction of all the fossils found here.

In the museum basement, Baumgartner slides open drawer after drawer of specimens — from iridescent ammonite shells to dainty pterosaur wings to mosasaur teeth shaped like ping pong balls that were used for crunching up oysters.

In all, this collection is home to more than 20,000 fossils. And that’s what continues to draw the world’s scientists here. 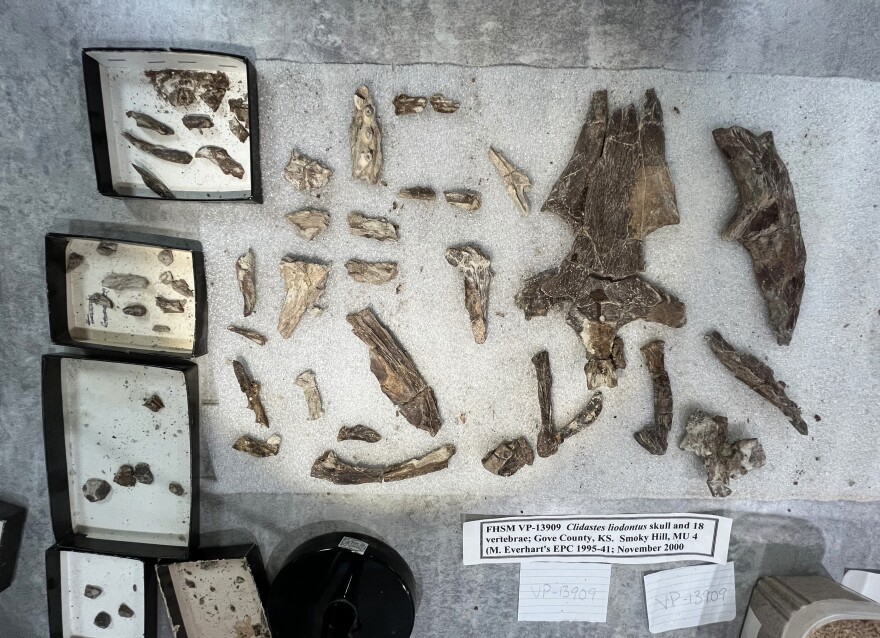 On the other side of the room, Japanese researcher Mori Chida holds up a fossilized fish jaw and compares it with a scanned image on her laptop of another jaw. Chida traveled to Hays from the University of Alberta in Canada specifically to study the abundance of fish fossils in this building. Nowhere else has this many well-preserved fossils, she said, so it’s well worth the trip. “That is not common in the other places in the world,” Chida said. “That’s why here is special.” 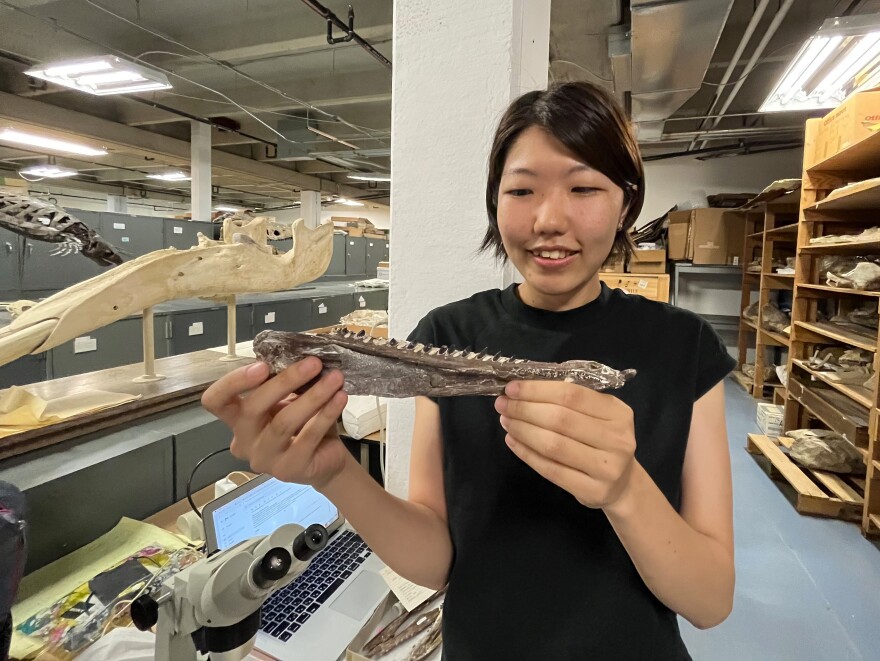 So what makes western Kansas such a paleontological marvel?

To dig up the bottom of most prehistoric oceans, scientists would have to dive to the depths of the Pacific or the Atlantic. But in Kansas, stuff that used to cover the seafloor lingers in the crust of the prairies. That makes it easy for scientists to get to.

Also, 80-million-year-old marine fossils tend to be extremely fragile. Think of the thin bones of today’s fish. Or the hollow bones that enabled pteranodons to soar over the ancient seas even though they had wingspans the size of Uhaul trucks.

Western Kansas is one of few places on Earth where the rock encasing those bones is actually more delicate than the bones themselves. These badlands are made of soft chalk, so scientists can brush it away without wrecking the fragile skeletons inside. 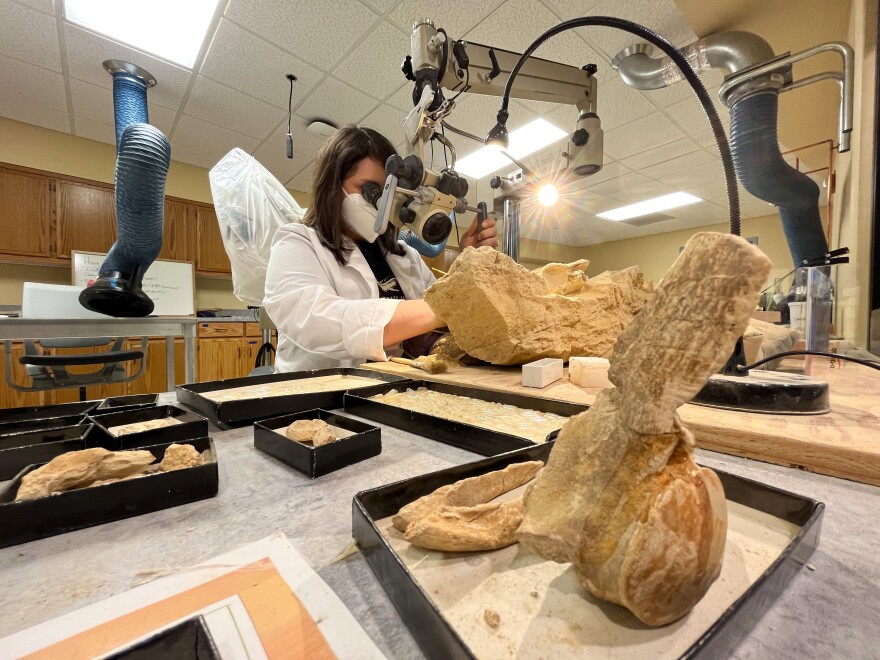 At a counter across from the fish-within-a-fish display, Baumgartner greets a wide-eyed young visitor who walks over to watch a Fort Hays State student in a lab coat gently scrape chalk from a mosasaur vertebra with a bamboo skewer. His parents are surprised to learn this sea monster came from the western Kansas county they just drove through on their way to the museum.

Time and time again, Baumgartner said, Kansans find it hard to believe that this often-overlooked part of the world plays such a pivotal role in the chronicles of scientific discovery. That makes it all the more gratifying when she gets to tell them.

“It’s fun to tell people from Kansas how important this is because we are often the butt of jokes, and it shouldn’t be the case,” Baumgartner said. “The history of Kansas includes sea monsters. How cool is that?” 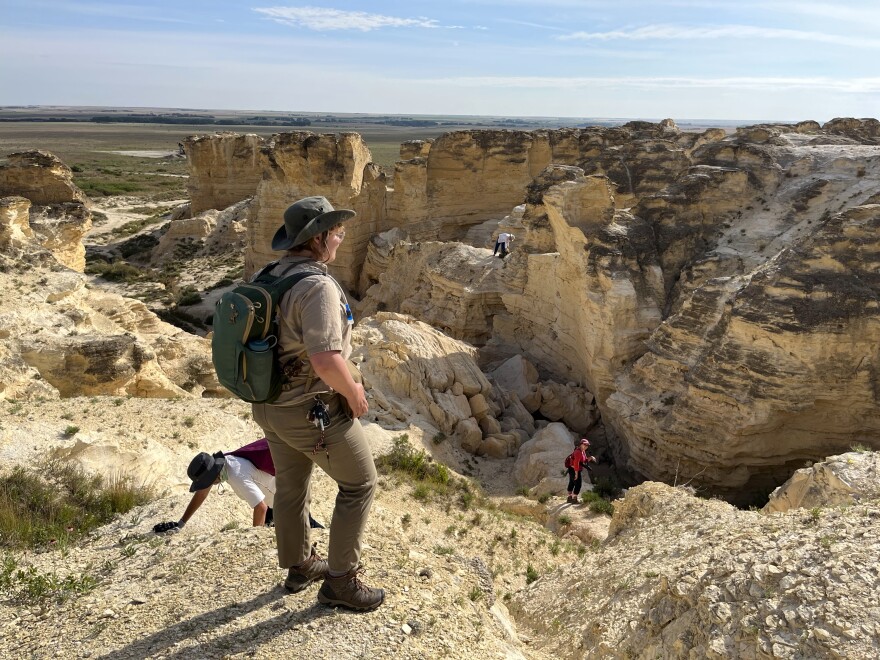 A lot has changed since George Sternberg unearthed his fish-within-a-fish masterpiece.

Modern trucks have grown big enough to carry a 14-foot fish. New technology can make three-dimensional scans of a fossil with lasers and electronically share those detailed images with researchers around the globe.

And the philosophy of paleontology, Baumgartner said, has shifted away from prioritizing showmanship — making the prettiest fossils for display — to prioritizing preservation and ensuring that future generations have the chance to discover new things about mounted fossils that today’s scientists might have missed. 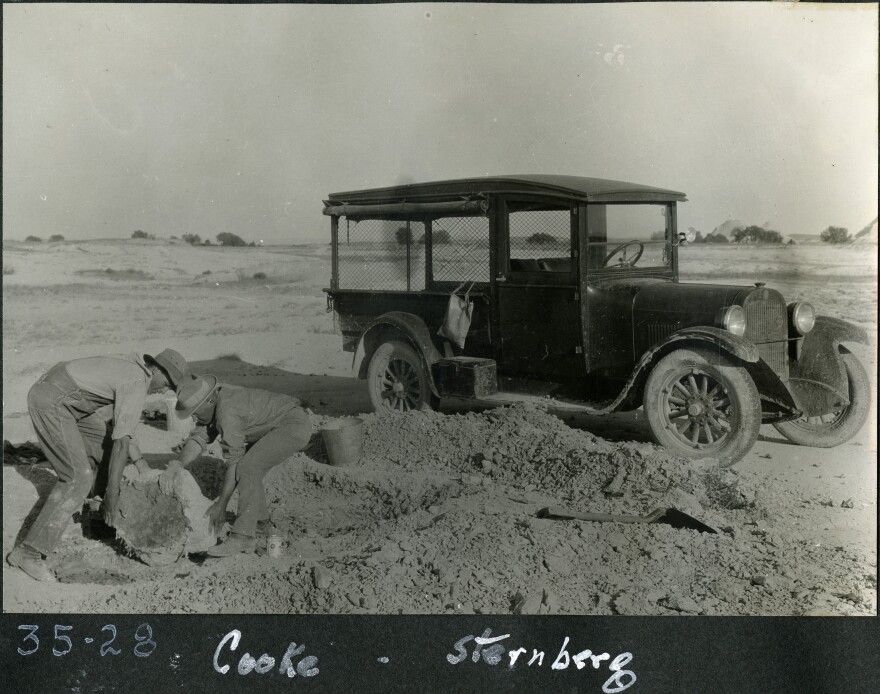 But one thing that hasn’t changed all that much? The actual work of finding and excavating fossils.

Paleontologists continue to rely on a lot of the same tools that Sternberg would have used in the field 70 years ago — often repurposed household items like paint scrapers, dental picks and brushes.

And making a new discovery in the western Kansas chalk beds still requires a lot of staring down at the ground. 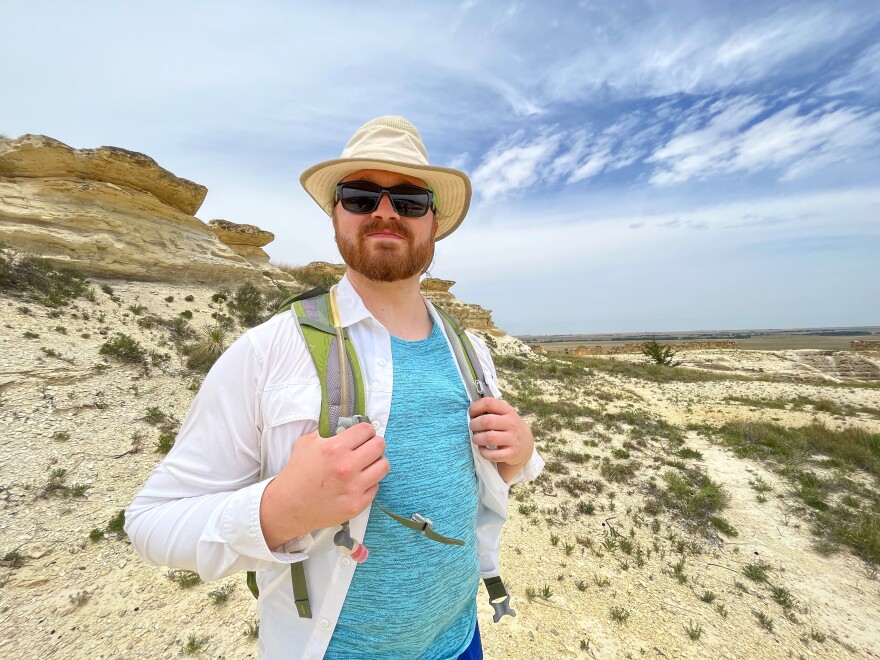 One morning at the Castle Rock badlands, paleobiologist David Levering leads a group from Fort Hays State through the towering pillars of white and golden rock.

Each member of the party fans out, slowly and methodically making their way up a draw toward the top of a ridge. One square foot at a time, they squat down to sift through the rubble, looking for any small sign of the creatures that once swam here.

“There’s fragments of them all over the place,” Levering said. “I can see maybe seven at your feet right now where I'm standing.” 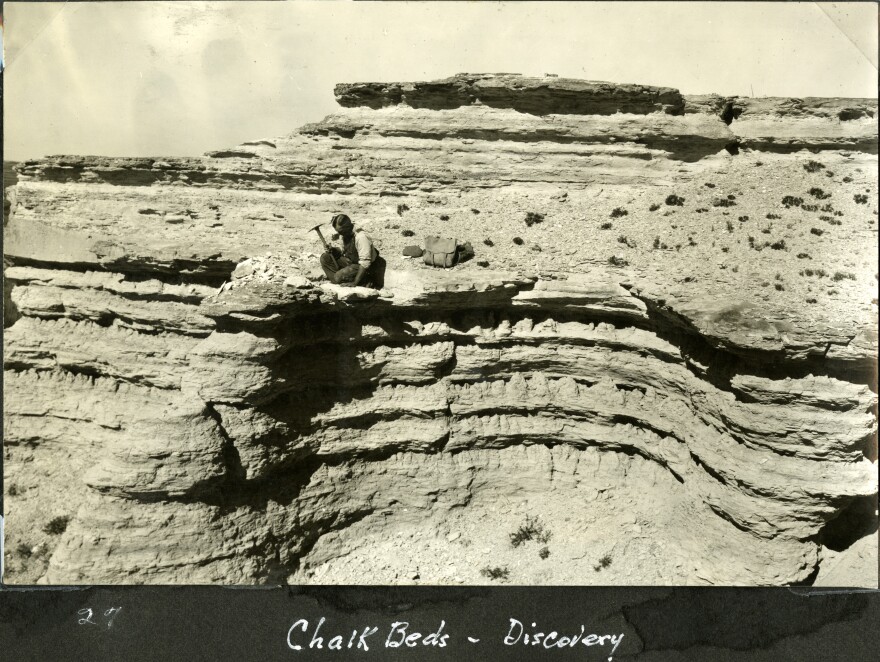 Out here, those signs of ancient life are everywhere.

But spotting a pea-sized fossil fragment in a sea of broken chalk takes resolve. And patience.

Program assistant Katie Gatlin brushes her hand across a small pile of rocks that have collected on the uphill side of a sagebrush. That’s a good place to start, she said, because it’s where pieces of these fragile chalk formations end up when the rain washes them down.

Katie Gatlin examines a pile of rocks, trying to spot fossilized fragments of creatures that once lived in the Western Interior Seaway.

But this time, no luck.

“If I don't see anything,” Gatlin said, “I'll stand up and then take one or two steps forward and just do the same thing. Over and over again.” 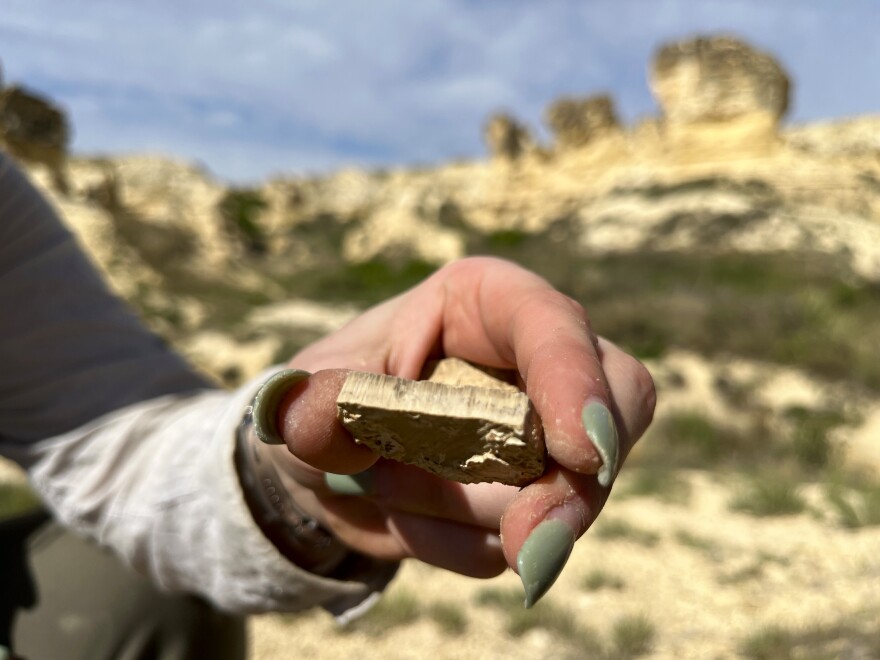 By the end of the morning, Levering’s group had examined dozens of clam pieces, some fish bones and a few shark teeth. One still looks sharp, a glistening black arrow rooted in the white chalk.

Each little puzzle piece marks another small step toward understanding life in this dried-up sea — and maybe another step toward building more Kansas pride in the watery world that once called this place home.

“Kansas has a lot of appreciation for the modern prairie,” Levering said. “The seaway is worthy of a similar level of respect and … celebration.”

Chuck Bonner knows the triumphs and travails of western Kansas fossil hunting all too well.

About an hour west of Castle Rock, Bonner flips through photos from decades of family fossil expeditions inside Keystone Gallery, the 1916 stone church that he and his wife, Barbara, turned into a DIY fossil museum that their brochures tout as “conveniently located in the middle of nowhere.”

There’s a picture that shows his father and brother digging out the skull of a long-necked marine reptile called a plesiosaur. Another shows him and his son excavating a skeleton that’s now at the Natural History Museum in Los Angeles. 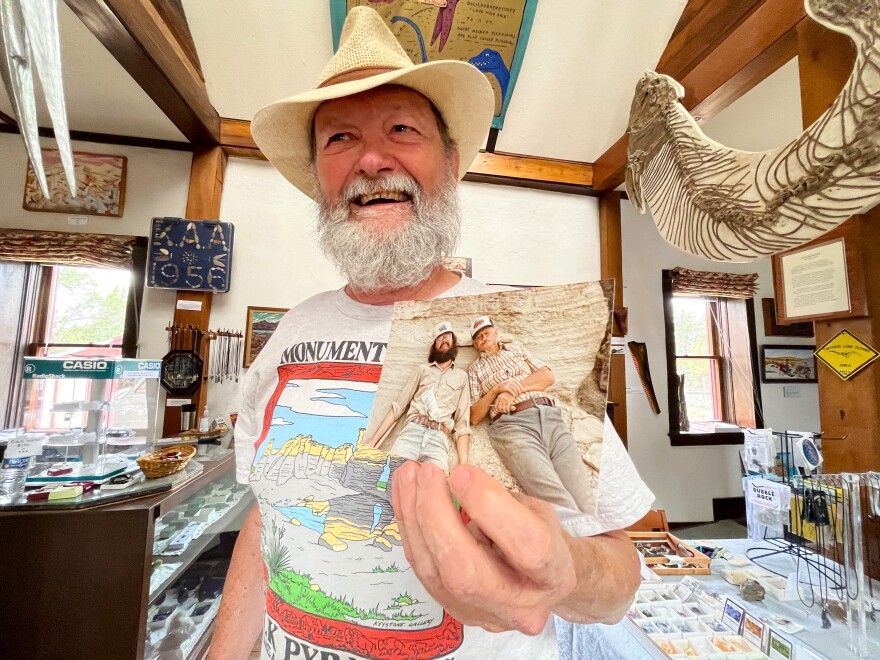 On the wall hangs a childhood portrait of his older sister at a family fossil hunt. She’s holding up a white cloth to shade her head from the sun.

As a kid, Bonner remembers seeing his dad — who was a friend and collaborator of George Sternberg’s — assemble plesiosaur skeletons on the family’s dining room table.

To remove minerals from the fossils, sometimes his dad would heat them up in their oven.

“It was a joke that we were going to have plesiosaur for supper,” Bonner said. “But it didn’t ever go that far.”

Fossils the Bonner family have discovered are now part of prestigious museum collections from Germany to China. They even had a species of pteranodon named after them.

And Bonner has carried on that family tradition, excavating hundreds of fossils over the years, all dug up within a 30-mile radius of his home in Logan County. The first mosasaur he ever found is now at the Field Museum in Chicago — he’s never seen it there, but it’s on his bucket list. 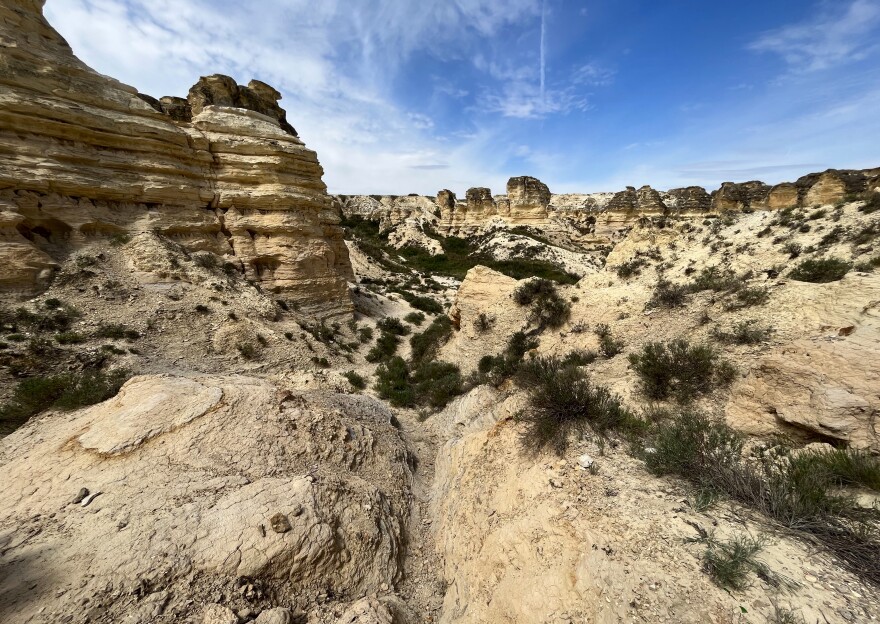 For Bonner, fossil hunting isn’t about fame or purely academic study — he said he’d rather be out in the field than in a museum basement.

He hunts for the thrill of discovery. To unearth a new clue about a bizarre, bygone era right in his backyard.

And he said that’s what will keep him digging around in the western Kansas badlands for as long as he has the strength to do it.