TOPEKA, Kansas — A near sweep by conservatives over moderates in several primary races this week sets up more conflict over the next two years between the Republican-led Legislature and Democratic Gov. Laura Kelly.

“There will be a lot of feuding and fighting going on, particularly given the COVID situation,” said Rep. Tom Phillips, a moderate Republican from Manhattan who isn’t seeking a fifth term.

Republican leaders could further limit Kelly’s power to guide the state’s response to the pandemic and power past her objections to reducing corporate taxes.

Outgoing Senate President Susan Wagle, a Wichita Republican, said the primary showed that “Kansans want to live in a culture of limited government.”

“My focus now is to preserve our veto-proof majority in the Kansas Senate to keep a check on Laura Kelly’s liberal policies,” Wagle said in a statement. 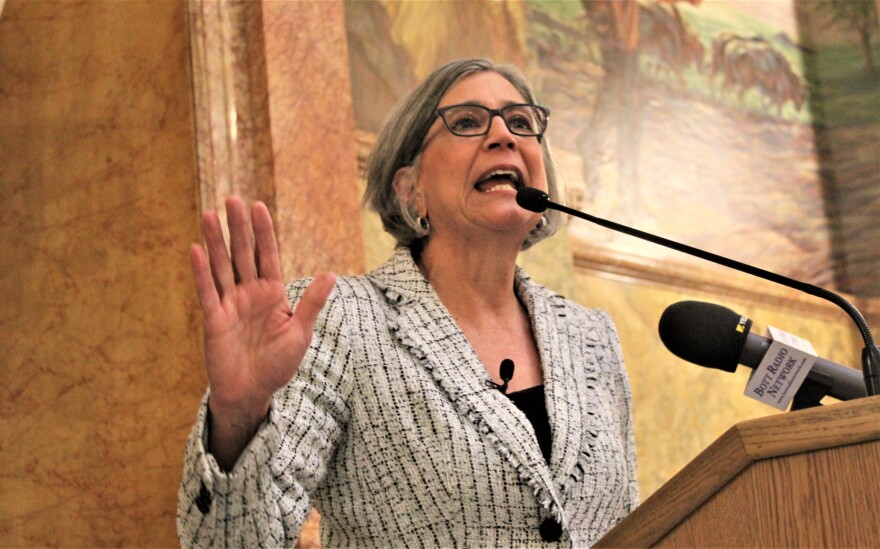 “Unless the governor has some grand compromise that she’s willing to work out with the conservatives,” he said, “I just don’t think it moves forward.”

Many of those races weren’t close. Sen. John Skubal of Overland Park got only 36% of the vote in his loss to Rep. Kellie Warren. Conservative challenger Mark Steffen beat Sen. Ed Berger, a former president of Hutchinson Community College, 57% to 43%. In southwest Kansas, moderate Sen. Mary Jo Taylor suffered a 20-point loss to conservative challenger Alicia Straub. And Sen. Randall Hardy of Salina managed only 37 % in his race against conservative Rep. J.R. Claeys.

“The Republican Party, both in Kansas and nationally, is getting more conservative,” said University of Kansas political scientist Patrick Miller.

He said that puts moderates at an automatic disadvantage in primaries.

“There are just fewer moderates in the Republican Party than there were 10 years ago,” he said, “especially in rural and small-town Kansas.”

GOP moderates beat conservatives in only two Senate primaries. Rep. Brenda Dietrich defeated Sen. Eric Rucker in a Topeka district and Sen. John Doll of Garden City — he ran for lieutenant governor as an independent in 2018 — held off a challenge from conservative Lon Pishny.

Money and endorsements from the Kansas Chamber and anti-abortion organizations helped fuel the effort by conservatives to win back seats they lost in 2016.

Abortion was a big issue in Jane Dirks’ win over Rep. Jan Kessinger in a Johnson County district that includes parts of Leawood and Overland Park. Kessinger was one of only four House Republicans to vote against a proposed constitutional amendment sought by anti-abortion advocates.

That vote mobilized groups like the anti-abortion Students for Life Action, which contacted 4,000 voters in the district to make sure they knew about Kessinger’s vote against putting the amendment on the August primary ballot.

Titus Folks, an organizer for the group, said Kessinger’s defeat is “one that Republican politicians should take note of.”

“It is overwhelmingly clear that pro-life issues are a priority for Kansas conservatives,” he said in a statement congratulating Dirks.

Dirks won the GOP primary with relative ease. But Miller, the KU political scientist, said she could lose to Democrat Mari-Lynn Poskin in the general election.

“That’s a district that Democrats are probably going to be favored to pick up because of (the moderate) Kessinger’s loss,” Miller said. He said voters in the district favored Hillary Clinton over Donald Trump in the 2016 presidential race.

Conservative Republicans could also be vulnerable in other Johnson County districts that, Miller said, “are getting very blue.”

That includes the race between Republican Sen. Mike Thompson and Democrat Lindsey Constance in a district that covers parts of Shawnee, Overland Park, Merriam and Bonner Springs.

Miller sees a similar dynamic in the contest between Warren, the primary winner over Skubal in the 11th Senate District, and Democrat Joy Koesten, a former Republican member of the Kansas House who switched parties in 2018.

Democratic gains in the general election could offset those made by conservative Republicans in the primary, but only partially, Miller said.

Jim McLean is the senior correspondent for the Kansas News Service, a collaboration of KCUR, Kansas Public Radio, KMUW and High Plains Public Radio focused on the health and well-being of Kansans, their communities and civic life. You can reach him on Twitter @jmcleanks.