Hazara refugees build a new home in Kansas City, but want help for loved ones in Afghanistan

Kansas City-area members of Afghanistan's Hazara ethnic minority — some new arrivals since the U.S. evacuation in 2021 — are creating a community and celebrating traditions here while trying to call attention to the risk of genocide back in Afghanistan.

Aziz Nadim works as a bank teller in Gardner, Kansas. He is among approximately 750 refugees who came to Kansas City after United States forces left Afghanistan in 2021.

Since the Taliban took power, Nadim is worried about the future of his friends and family — his fellow members of the Hazara ethic minority who have long been targets of violence.

"The Taliban have resumed the process of massacre of Hazara that started a century ago,” Nadim said, “and they are trying to hand over the lands and properties of Hazara to the individuals and groups they support.”

About 60 Hazara families are living in the Kansas City metropolitan area. Mohammad Ibrahimi, who arrived in 1983, believes his was among the first Hazara families to come to the area. They now live in Overland Park.

“We left Afghanistan because of Hazara genocide,” Ibrahimi said, adding that the communist government at the time was against Hazara people because of their religion and ethnicity. “They kidnapped and killed my brother after we decided to leave our ancestral land. First, we went to Pakistan, (then) Italy and then we came to the United States in 1983.”

A few other Hazara families arrived after the first time the Taliban took over the government of Afghanistan in the mid-1990s, and during the two decades when the country was led by the U. S.-backed government. Almost all of these families came through Special Immigration Visas because they had worked for the U.S. Army or on behalf of the U.S. government in Afghanistan. Others were assisted by international immigrants’ organizations.

When nearly 60 young Hazara girls and teenagers were killed in an explosion at a school in Kabul in September 2022, I could easily imagine the scene. I used to live in the area where the school was located, and my mother and two of my sisters’ families still live there. Initial reports said 53 people died, but I heard from sources in Kabul that five or six injured girls died later, after weeks in hospitals.

After that, I joined other Hazara people who demonstrated in front of Kansas City’s World War I Museum and Memorial.

“Our goal was to draw the attention of American institutions and people to the dangerous situation that Hazara people are facing in Afghanistan,” Nadim said. "Here in Kansas City our children can go to school and prepare for a future, but the Hazara people living in Afghanistan do not have security, food or a bright future.”

Nadim wants international institutions to deal with the massacre of Hazara and the violation of their human rights. After the September explosion, a social media campaign began with the hashtag #StopHazaraGenocide. Hazara people who left Afghanistan hope it will draw attention to the genocide of their people back home, and that the United Nations will take action to protect them.

This ethnic cleansing began in 1882 when Afghan ruler Abdul Rahman Khan first ordered the killing of Hazara people and the capture of their land. More than 60 percent of the Hazara were killed and their lands confiscated. Some then fled to parts of India that are now part of Pakistan, and others remained in remote parts of Afghanistan.

Since then, Hazara people have been discriminated against, are unable to join or work in the military, and must pay double taxes.

Their culture and traditions were endangered when the Taliban first took over and tried to remove all Hazara from Afghanistan. Between 1996 to 2001, the Taliban government blocked the delivery of food, gas and other necessities. The Taliban also destroyed the Buddhas of Bamiyan, a symbol of the culture and history in Afghanistan.

Hazara people in Kansas and Missouri

Gholam Rasoul Rahimi (no relation to me) came to the United States in 2020.

“I had to leave Afghanistan, because of two reasons: I was a warehouse manager for the United States embassy in Kabul, and because of my religion and ethnicity,” Rahimi said. “Nobody wants to leave his home but sometimes you see a dark future for your children requiring one to make hard decisions.”

He and several Hazara people who came to Kansas City have started to establish a community here.

“We are in contact with all Hazara families,” said Nadim. “We want to honor our Hazara heritage. We try to preserve our culture and identity values. Let's not forget our mother tongue."

For the first time in Kansas City, on Dec. 17, 2022, Hazara people celebrated Shab Yalda, a tradition in Afghanistan to mark the longest night of the year.

Ali Mosawi, a young Hazara man, coordinated this ceremony in the Northeast neighborhood of Kansas City, Missouri, inviting Hazara families from as far away as Wichita and Manhattan, Kansas. They celebrated with bolani (flatbread stuffed with vegetables), ashak (vegetable dumplings) and ash (a vegetable noodle soup).

“We brought traditional Hazara dishes, we wore our cultural traditional clothes, we ate together and told our historical story to their children,” Mosawi said.

“We want to make sure that our children don’t forget their native language,” Rahimi said. “We lost our homeland. At least in the last two decades Hazara people were a part of a new Afghanistan. We had our own self rule, governing education, medicine, health and sport. Hazara women also prospered. They had a good chance to bring changes to their life.”

He said Hazara families want to teach their children to work hard to build their future in the United States and to be true to the values of this country, but not forget that their families came from a country where their next generation is facing genocide. 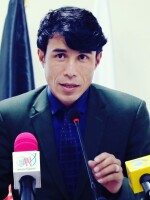 Qasim Rahimi
Qasim Rahimi was born in Afghanistan. His bachelor's degree is in journalism and his master's degree is in international communication. He was a war and peace reporter, and worked as a public awareness and information director for the government of Afghanistan, for 14 years. Rahimi left Afghanistan in 2021 and came to the United States, where he is awaiting asylum. Since June 2022, he has worked as an immigration specialist with Jewish Vocational Service. Find him on LinkedIn or follow him on Twitter @QasimRahimii.
See stories by Qasim Rahimi