This week on Film Music Friday we're hearing the music of Bond, James Bond.  Rather than the enormously popular songs that have opened most 007 movies, we'll focus instead on the orchestral scores created for the films by composers like John Barry, David Arnold, Marvin Hamlisch, Hans Zimmer and others, including themes from Dr. No, Goldfinger, You Only Live Twice, The Living Daylights, the most recent Bond film, No Time to Die, and more. 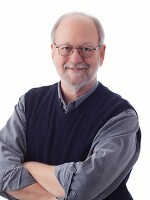 Darrell Brogdon
Darrell is a self-described "radio rat," having started on the air in high school and still hasn't hung up his microphone. His first job was DJ-ing at KERV-AM, the only radio station in his hometown of Kerrville, Texas. After getting his speech and drama degree at North Texas State University, Darrell kicked around the dial before landing at KANU in 1982. In addition to his role as Program Director, he has produced just about any kind of show imaginable at KANU/KPR - quiz shows, radio dramas, concert broadcasts, arts magazines, record shows. A fanatical record collector, the second floor of Darrell's house is threatening to become the first floor under the sheer weight of accumulated LPs. Darrell sums up his on-air time thusly: "Doing The Retro Cocktail Hour and Right Between the Ears is like having the world's biggest electric train set.
See stories by Darrell Brogdon