TOPEKA, Kansas — Directly across the street from the Kansas Statehouse sits the brick home of Mater Dei Catholic Church.

A large purple sign on the front of the church pleads for votes to change the Kansas Constitution that would open the way for an abortion ban.

Across the state, other churches and clergy have taken very public positions in perhaps the most contentious issue dividing the state — and the country. They’re actively, even aggressively, backing what supporters call the “Value Them Both” state constitutional amendment.

With the Roe v. Wade ruling that promised abortion rights for nearly half a century rendered a mere legal artifact, conservative churches are campaigning for a change in Kansas that would open the door for the lawmakers to restrict access to abortion as drastically as they see fit.

“We have seen people working across these different faith traditions in a way we haven’t seen before,” said Danielle Underwood, a spokesperson for the coalition backing the anti-abortion amendment.

The proposed amendment — which would say the Kansas Constitution does not protect access to abortion — has received support from the Catholic Church, the Kansas-Nebraska Convention of Southern Baptists and the Lutheran Church–Missouri Synod, Kansas District.

All told, each organization oversees or is affiliated with hundreds of churches across Kansas, creating a powerful force urging churchgoers to vote for a change to the constitution.

“Faith communities have good organizational structures and those have been helpful in being able to communicate across the wide geography of Kansas,” Underwood said. “We’ve been able to work together person-to-person, church-to-church and community-to-community to make sure we educate as many Kansans as possible.”

The Archdiocese of Kansas City in Kansas gave $500,000 to the campaign, according to the Sunflower State Journal. Other dioceses added another $260,000 to the effort. 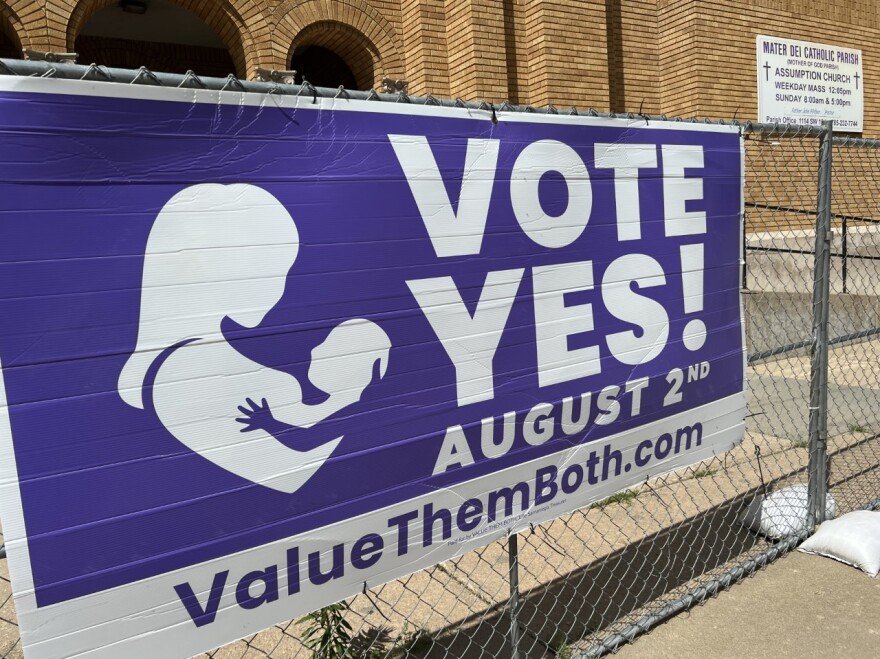 Normally, churches risk losing their charitable status under federal tax laws when they step into politics.

But the constitutional amendment vote is a ballot measure, and not a political candidate seeking office. That means churches and other charitable organizations have leeway to become election advocates, according to the Internal Revenue Service.

Abortion access in Kansas is currently protected by a 2019 Kansas Supreme Court ruling that found the state constitution includes the right to an abortion. That ruling spurred the Republican-dominated Kansas Legislature to push for the change on the Aug. 2 ballot.

As Kansas hurtles closer to the election date, churches have posted signs and held events to advocate for the amendment.

Debra Niesen — an abortion opponent consultant for the Archdiocese of Kansas City in Kansas, which oversees Mater Dei in Topeka — said the church is morally obligated to advocate for the amendment.

“Kansans need to know that ‘Value Them Both’ will return to the people of Kansas, through our elected officials, the ability to determine public policy on abortion in our state,” Niesen said.

Some church events feature political figures. At Central Christian Church in Wichita, Matt Schlapp, chairman for the American Conservative Union, and his wife, Mercedes, campaigned for the amendment in the church sanctuary.

Mercedes Schlapp asked the churchgoers to pray for the campaign to pass the amendment and said God gave them the power to do it.

“He has given us great talents to go out there and take this cause and really convince people to go out and vote,” she said. “This is a moment in time we can really make a difference.”

None of the representatives for the Kansas-Nebraska Convention of Southern Baptists, the Lutheran Church–Missouri Synod, Kansas District, or Central Christian Church responded to requests for comment for this story. 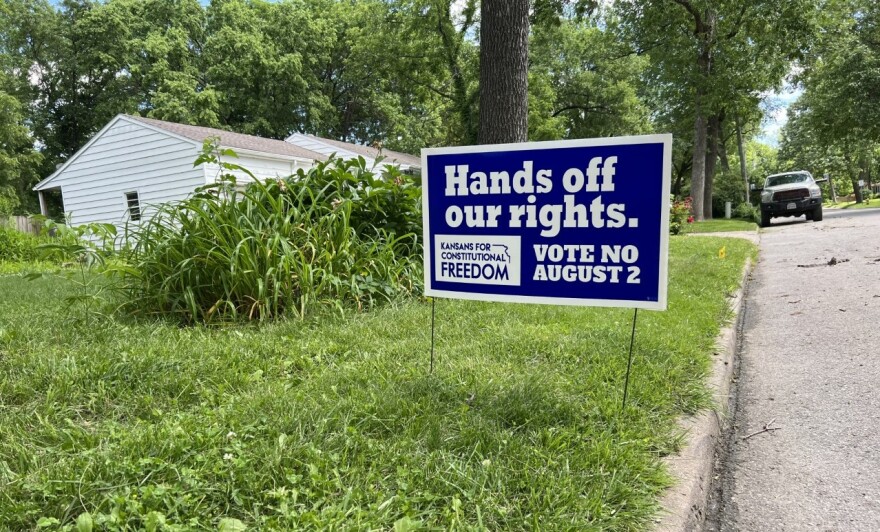 Meanwhile, some other Kansas churches are posting signs and holding events to oppose the state constitutional amendment.

Her congregation is divided on the issue. But Andrews said she will vote against the amendment.

Andrews also encourages her church to vote on the amendment and explains why she believes restricting abortion can hurt some people and does not contribute to “abundant life.” But she said she would not actively tell the churchgoers how they should vote.

“It’s a chance for us to witness how we live out our faith,” Andrews said.

Kansans will vote on the constitutional amendment Aug. 2. All registered voters in Kansas can cast a ballot on the amendment, even if they are not affiliated with a political party.