At the western edge of Kansas, against the border with Colorado, sits Wallace County, the second-least populated county in the state. For the first half of 2020, the rural community got by without a single case of COVID-19 and life maintained a sense of normalcy. For the Kansas News Service, Esther Honig went there to see what’s changed … now that the virus has finally arrived.

WALLACE, Kansas – Wallace County is at the western edge of Kansas, on the border with Colorado. It’s the second-least populated county in the state, and for the first half of 2020, life here maintained a sense of normalcy while the rest of world dealt with the COVID-19 pandemic.

Sure, businesses closed in March and stay-at-home orders went into effect, just like the rest of the state. But by summer, many in Wallace County, population about 1,500, felt it unnecessary to take more severe precautions. Officials voted against enforcing the statewide mask order. Riders competed in an amateur rodeo and the annual county fair went off without a hitch. The local pool even opened.

Social distancing is a way of life, with about one square mile for every two residents. So, it may have come as a shock when the first case of coronavirus was finally reported on Aug. 20. About a month later, that number has grown to 17.

“I don't think there was a magic imaginary fence around our county that kept it out and somebody just forgot to close the gate,” said Erin Wright, who owns and operates the Townsend Tavern in Wallace.

On a Friday afternoon in September, Henry Crawford sat on the open prairie wearing a blue flannel and knee-high leather boots, showing a group of elementary students how to carefully pack an antique cartridge with gunpowder.

Normally, this would not be a part of the lesson plan, but students were visiting a historic re-enactment at the Fort Wallace Museum. Crawford, a historian and retired university professor, traveled here from Texas to teach visitors about buffalo hunting, which was one of the main economic activities on the High Plains in the early 19th century.

The encampment, as it’s called, had about two dozen re-enactors, all of them dressed in period clothing as they demonstrated activities like churning butter or building a wagon wheel.

Also true to the time period, no one was wearing a facemask. 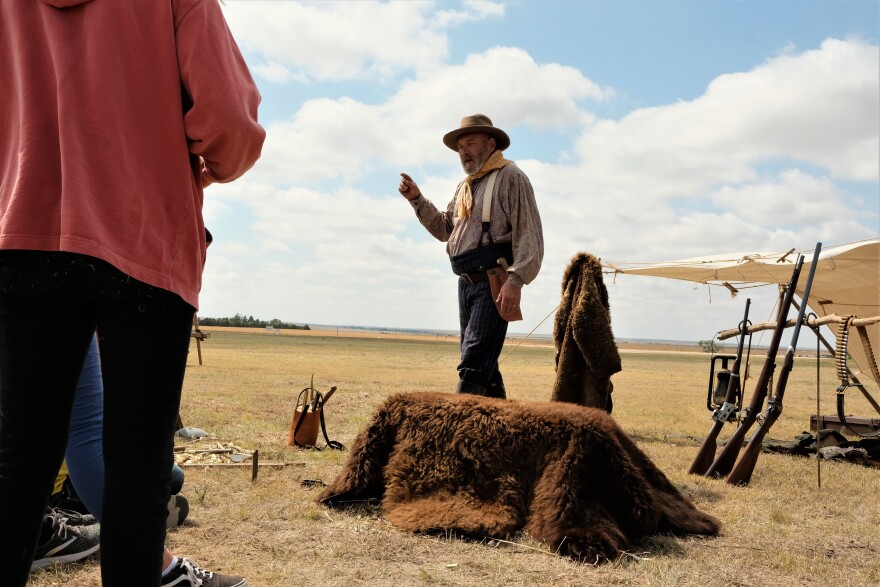 “I think this is a great solution because we are following state guidelines,” she said. “And yet we're sharing history in a very rich way. So, who's losing?”

Every 10 minutes, someone fired a gun to let the students know it’s time to rotate to the next display, which helped prevent the groups from commingling.

This is the museum’s big annual event. Hundreds would pass through over the next few days and a buffalo hunting trip was raffled off to one lucky visitor.

Humphrey said people in Wallace County need a middle ground between being careful and still allowing the types of activities that are a cornerstone to life here.

“You're balancing all these cultural needs against a pandemic and trying to make common-sense decisions,” she said. 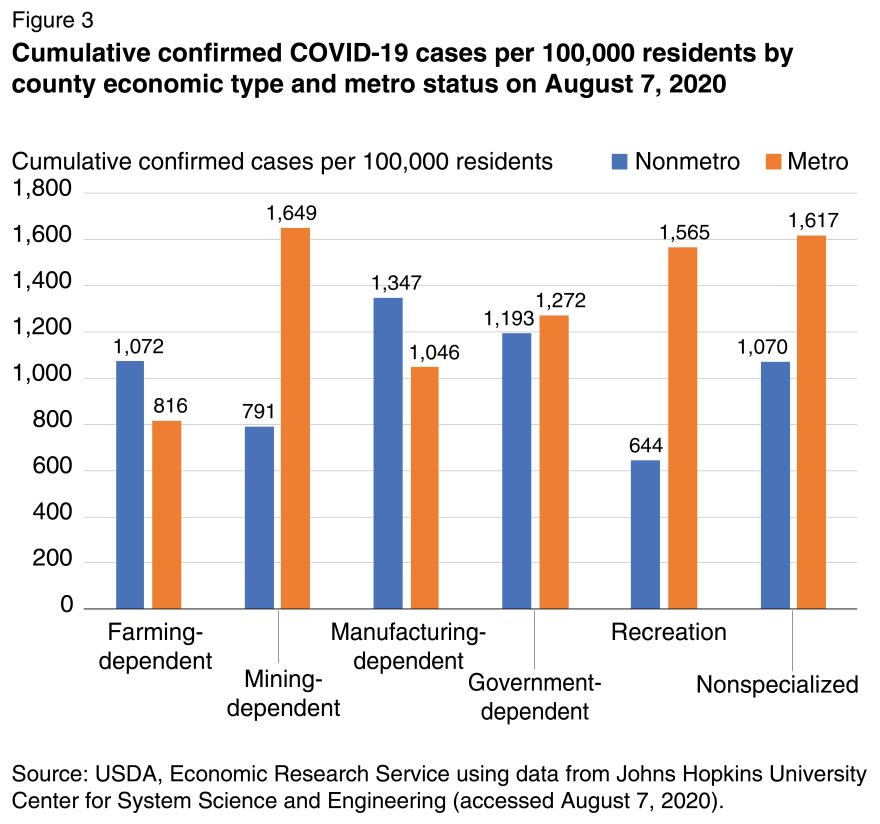 Some might consider these moderate precautions to be a gamble, but it’s one that this rural county may be well positioned to take. According to data from the U.S. Department of Agriculture, rural farming communities tend to have a lower prevalence of COVID-19 cases. (That’s not to be confused with rural counties with manufacturing or processing facilities, which have seen large outbreaks.)

Wallace County’s economy is rooted in agriculture, mostly wheat and corn. Even the local unemployment rate has remained relatively unchanged: The majority of local businesses, grocery stores and a few restaurants are essential, so hardly anyone has been out of work.

In July, when Gov. Laura Kelly signed an executive order mandating masks in public, Wallace County opted out. County Commissioner Bruce Bolen said his reasoning at the time was that Wallace had yet to report a single case of COVID-19.

Bolen, a fourth-generation resident, said the people of Wallace are just as independent as their pioneering ancestors.

“If we end up having to do a mask order, I think they will be more accepting because then they know that we allow them the freedom to make their own choices at first,” he said.

As is typical for many rural communities, Bolen wears many hats. He’s also a school superintendent and if the football team needs a ride to next town over, he fills in as the bus driver.

Over the summer, life felt a bit disconnected from what was happening in the rest of the country. Even as people watched the news and talked to friends and family in nearby cities, Bolen said there was a sense that somehow the virus wouldn’t be an issue for them.

Bolen said it can be difficult for a small community like theirs to identify with a large city. For instance, his daughter works at a school in Topeka with 2,000 students. That’s quite a bit larger than the entire community of Wallace, Kansas, (about 60), not to mention the county itself.

“Which in the same time makes it a little bit more of a challenge to make people understand this (virus) is real,” he said.

If the number of cases in Wallace County continues to climb — and it is expected to — Bolen said officials will impose stricter regulations. When that happens, he worries not everyone is going to be onboard.

Wright, the restaurant owner, expects it’ll be a mixed bag.

“There will be people that do whatever is asked, there will be a lot of rebels,” she said, “I mean, it's the West.”

A new establishment serving western fare, Townsend Tavern is inside a 100-year-old building that the family remodeled. The décor is modern but pulls from the local history. The head of a buffalo, hunted on a nearby ranch, is on display in the dining room.

Wright said they opened last year and like any restaurant, their bottom line has been impacted by the pandemic. When they had to close her dining room for 48 days, Wright said she got creative.

“We went to car-hop service 1950s-style,” she said. “I put my waitresses in poodle skirts, and we brought in a milkshake machine and we showed a drive-in movie on the wall outside."

Wright said it’s easy for people to feel like they’re in a bubble and safe from everything, and admits herself that’s it’s easy to be complacent at times. But more people have started masking up and keeping a safe distance.

Making do is what the people Wallace County have always done. In fact, several people interviewed for this story admitted that while they were afraid of COVID-19, they were more afraid about being the first case in the county — where there is no anonymity.

“We went so long without a case and everyone kept saying everything will change when we have a positive case here,” she said, “And it really, I mean, it did.

“Luckily, people didn't get pitchforks out and want to try to find out who so they could contact trace and then burn everybody at the stake.”

Esther Honig is a freelance journalist and photographer based in Denver. The Kansas News Service is a collaboration of Kansas Public Radio, KCUR, KMUW and High Plains Public Radio focused on health, the social determinants of health and their connection to public policy. Kansas News Service stories and photos may be republished by news media at no cost with proper attribution and a link to ksnewsservice.org.