Story by By Aviva Okeson-Haberman

Kansas voters can already cast an early ballot in the upcoming August 4th election. One race to look out for is the Republican third district primary, where five candidates are vying for the chance to unseat Democratic Congresswoman Sharice Davids. For the Kansas News Service, Aviva Okeson-Haberman has more on how candidates are getting out their message in the final weeks of the campaign.

A global pandemic and protests over police brutality have helped shape the message and direction of the crowded Republican primary in Kansas’ 3rd Congressional District. While the five candidates are still talking about issues like health care and the national debt, they’re also now fielding questions about the role of the federal government in a public health crisis and their support for law enforcement.

Though Amanda Adkins and Sara Hart Weir have a clear fundraising advantage in the Aug. 4 GOP primary, they still lag behind the woman they’re trying to unseat, Democratic U.S. Rep. Sharice Davids. Plus, Adkins’ and Weir’s money hasn’t stopped some voters from coalescing behind the other candidates: Mike Beehler, Adrienne Vallejo Foster and Tom Love.

[You can read more about the candidates’ stance on issues like health care, the coronavirus response and immigration at KCUR’s voter’s guide for the Third District Republican primary.] 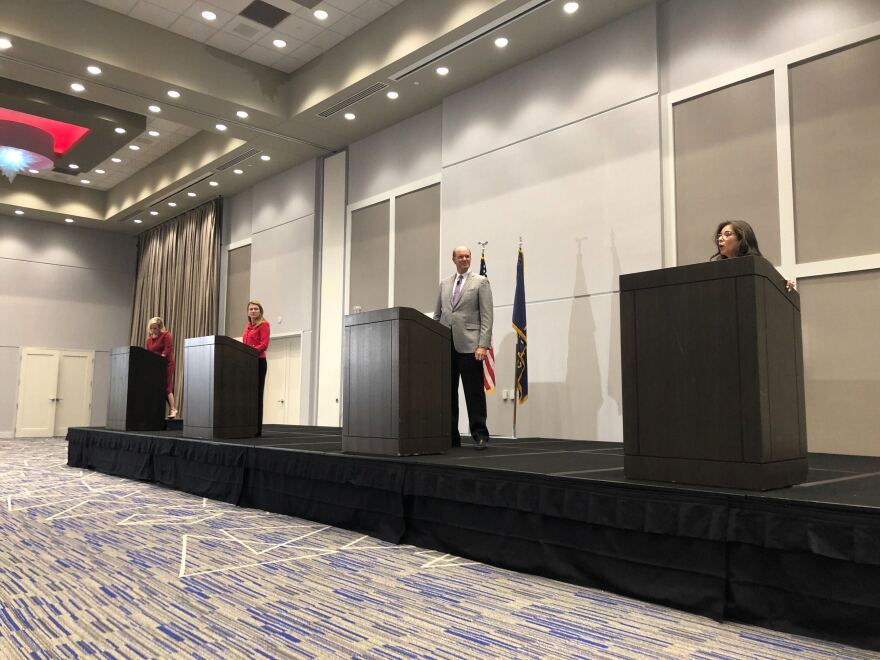 Policing in the spotlight

Policing and fiscal conservatism are the two key issues shaping Henry E. Lyons’ vote. The real estate developer and president of the Olathe, Overland Park, Leawood NAACP describes himself as an independent who is “leaning more toward the Republican side.”

The question of policing resurfaced in May, after George Floyd, a Black man, died after a Minneapolis police officer kneeled on his neck for several minutes. His death and others led to weeks of protests over racist policing tactics and calls for cities to pull back on heavily funding police departments. Close to home, Kansas City, Missouri, is looking to regain local control of its department from the state.

Lyons, who plans to vote for former Roeland Park Mayor Foster, said “there are some bad apples as there are in any business, but I don't think (the police) should be defunded.”

Earlier this month, all candidates but Love participated in a debate sponsored by the Johnson County GOP debate. And each candidate said they support law enforcement officers and do not want to defund the police.

“I call 911, I want lights and sirens coming to my house,” Beehler said to applause.

Both Foster and Weir support additional training for police officers. Adkins said while a “strong police force is part of a vibrant community,” Republicans should also talk about the “importance of supporting the Black community.” Fundraising is a key metric for the general election, since Davids has almost $2.5 million to spend already. The only 3rd District GOP candidate yet to report any fundraising is Tom Love, a real estate investor and former state lawmaker.

By the end of June, Adkins had raised more than $900,000 and had more than half a million left in the bank. She also has the support of a super PAC that has run ads attacking Weir for working for former Kansas Democratic Congressman Dennis Moore in 2004. The ads, which also portray Adkins as a “real Republican,” are funded primarily by Adkins’ father.

During a July debate, both Weir and Foster criticized Adkins for her father’s involvement.

“If my father were alive today, he would say, ‘Mija, if I had a hundred thousand dollars, I wouldn't give it to you to try to win a race,” said Foster, who as a Latina is the only candidate of color in the GOP primary. “I taught you how to earn your own way.’”

Weir also went after Adkins for donating to Cerner’s PAC while she was an employee. That PAC has donated to lawmakers on both sides of the aisle and the state line, including Missouri Democratic Rep. Emanuel Cleaver and Missouri Republican Rep. Vicky Hartzler.

“Your funneling of money to these liberal Democrats … goes against everything that we stand for as conservative Republicans,” Weir said. 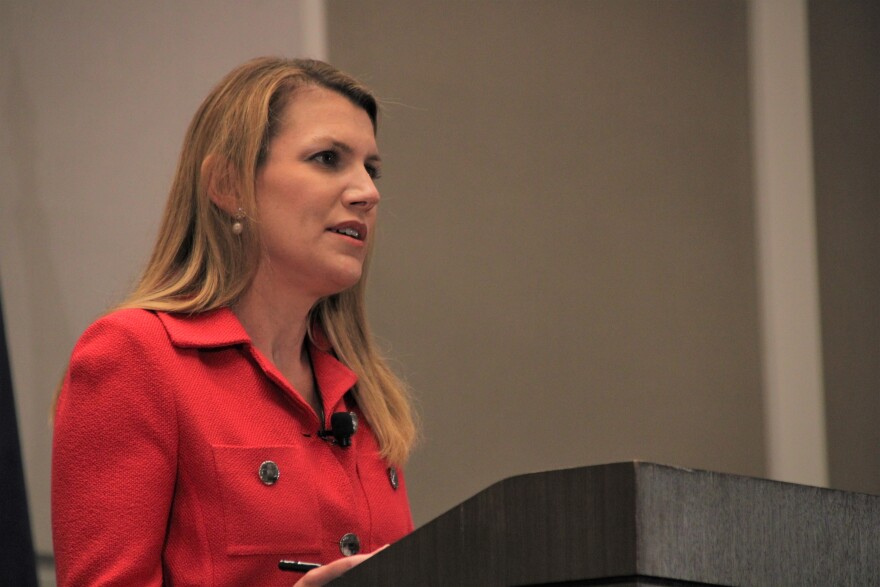 Adkins responded by noting she chaired the Kansas Republican Party for four years during the Sam Brownback administration and cofounded The Eisenhower Series, which encourages Republican women to run for office.

“The business that she is attacking is Cerner Corporation,” Adkins said, calling her large former employer “one of the best examples of innovation here in the Kansas City community. ”

Marty Oehmler attended the debate and said afterward that he isn’t interested in the fights among candidates. He wants to hear more about how they’ll help businesses and where they stand on gun rights.

“I'm not interested in attacking each other. I'm more interested on what the issues are, how are we going to solve the issues?”

In late June, at the first Miami County GOP meeting since the pandemic began, Beehler told the crowd of about 20 at a Louisburg restaurant that he thinks Republicans will take the 3rd District seat back on the “coattails of Donald Trump.” 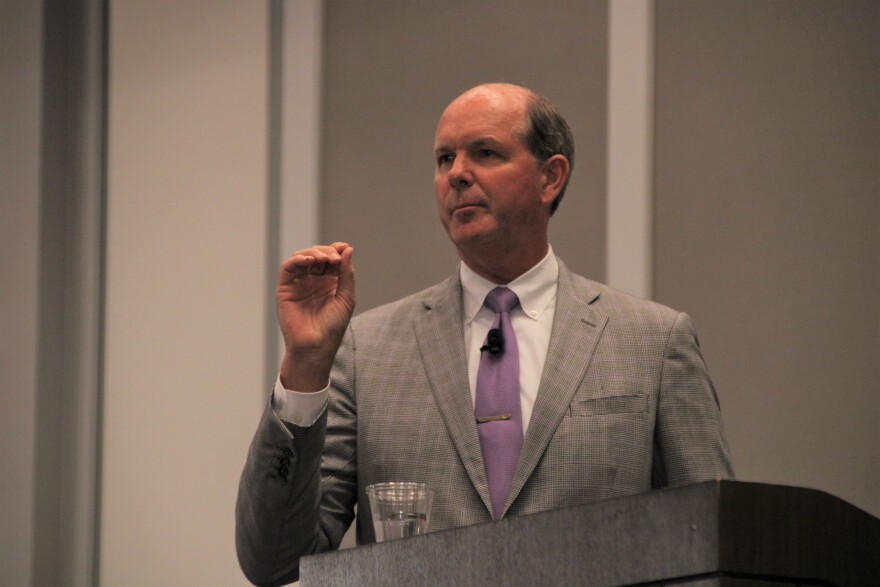 Beehler is pushing spending on infrastructure as the solution to economic recovery.

“Post-COVID-19, it looks like we're going to spend $2 trillion dollars on the construction,” Beehler said. “So what a great opportunity to elect a United States Congressman that's got a civil engineering degree and has been very successful in business.”

Foster during the debate criticized Beehler’s plan as too costly, and said she wouldn’t vote for additional coronavirus relief that gives money to “state, local or municipalities for the bad businesses practices that they've incurred.”

The desire to “rebuild our economy” is something Weir said she’s also hearing from voters. On a sunny Saturday morning in July, the former president and CEO of the National Down Syndrome Society crisscrossed an Olathe subdivision, knocking on doors and listening to Republican voters like Valeria Edwards.

“It's the term limits and people in the Swamp and people who've been there too long, like hello … we need fresh faces,” Edwards told Weir.

Weir responded that she supports term limits and described herself as a political outsider with a track record of “actually getting things done.”

But, like in the contested U.S. Senate primary race in Kansas, it’s electability that some voters are looking for in a candidate to represent Johnson and Wyandotte counties, and a slice of Miami County.

Alex Dwyer, 23, is one of the voters still mulling his choices, though he’s narrowed it down to Foster and Adkins.

“I think there's a couple of candidates who should recuse themselves and step down from the race to allow the two main contenders to go at it,” Dwyer said. “... This is a competitive race for the seat. And electability should be highly considered in a candidate.”