HAYS, Kansas — Many of the cattle killed by heat stress last month in southwest Kansas went into a landfill.

But that sudden extreme weather event, coupled with limited disposal options, meant that livestock owners might not have had much of a choice.

The Kansas Department of Health and Environment confirmed that 2,773 carcasses needed to be disposed of following the mass deaths in June, based on the assistance requests the state received from feedlots. That represents roughly 0.04% of the state’s inventory of 6.5 million cattle.

Reuters reported that close to 2,000 of those animals ended up at the Seward County Landfill in Liberal, Kansas. Hundreds more were buried in unlined pits on the property of feedlots, where cattle fatten up on grain in the weeks before they’re slaughtered.

It’s the reality of raising millions of 2,000-pound animals in a sparsely populated area: When even a small fraction of those animals die unexpectedly and simultaneously, there aren’t a lot of quick, easy ways to make them disappear.

“Some (feedlots) composted cattle that they lost in this event, some buried them and some had to go to a landfill,” said Kansas Livestock Association spokesperson Scarlett Hagins. “But … all of that is approved through the Kansas Department of Health and Environment.” 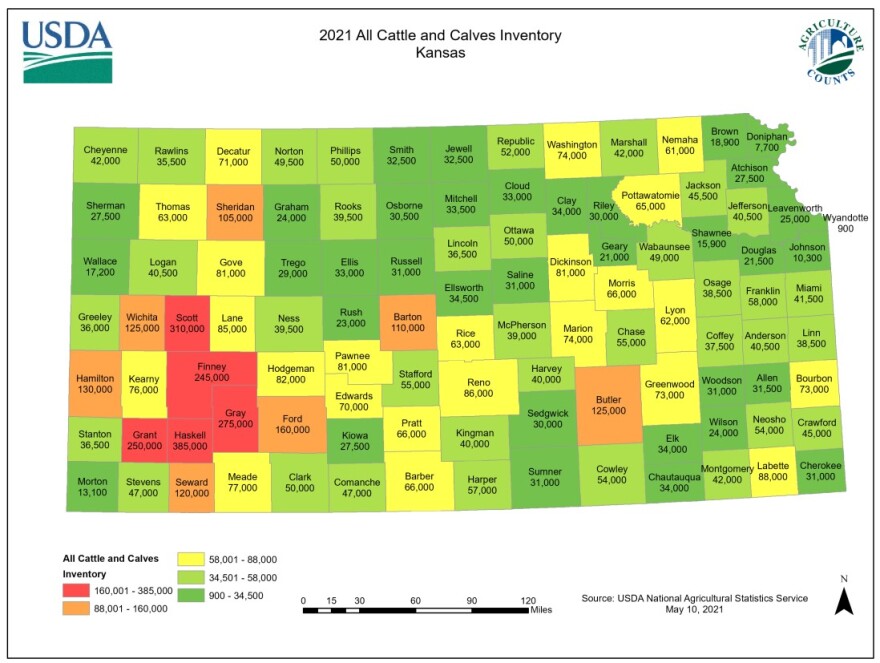 She said the first choice for disposing of dead cattle would be to send them to a local rendering plant. Rendering is a process that uses intense heat to turn carcasses into valuable byproducts that can be used in pet food, biofuel, paint and plastics.

But there are only so many rendering plants in western Kansas.

“The issue here was this was such an unusual event, and there were so many cattle involved,” Hagins said, “that the rendering companies got overwhelmed.”

So feedlots with piles of dead cattle had to find a plan B.

KDHE documents show that the state’s second choice for livestock disposal behind rendering is composting — decomposing the carcasses in mounds of soil to create fertilizer. But composting cattle requires a lot of space and consistent maintenance. Not every feedlot is set up to do that.

So if rendering and composting are out of the question, sending carcasses to a landfill is the next best option on the state’s list of preferred choices.

KDHE spokesperson Matt Lara said no state regulations limit the number of cattle that can go into a landfill. And all 50 of the municipal landfills in Kansas are permitted to accept carcasses, so it’s up to the individual landfill directors to decide whether or not to take them.

KDHE documents show that just 18 of those 50 landfills are lined, meaning that a barrier material is placed under the waste to keep toxic contaminants from leaking out.

State regulations do, however, require groundwater testing near these unlined landfills, and the state can revoke that exempt status if a site fails multiple tests.

The fourth preferred option on the state’s list is burying carcasses on-site, which is what happened to many of the cattle that didn’t go to a landfill last month.

When livestock die from a natural disaster, Kansas state law specifically allows people to bury carcasses in unlined pits on their property without a permit as long as they get state approval.

If carcasses are buried in the wrong spot or in the wrong way, it can pose a serious health risk as contaminants build up and seep into nearby water sources.

Lara said the KDHE determined that the burial sites it approved in this case did not pose an “unacceptable” risk to groundwater.

So while the weather event that killed those thousands of cattle was extraordinary — and could become increasingly common as climate change pushes temperatures higher — the outcome for the carcasses left in the wake of that heat wave wasn’t all that unexpected.

Hagins with the Kansas Livestock Association said that if those cattle hadn’t gone to a landfill, they might have been stuck openly decomposing on the ground where they died. That could have led to even more potential health risks.

“As an industry, we’d want it to be as timely as possible when you're trying to dispose of an animal,” Hagins said. “So in this situation, they had to employ all options.”