TOPEKA, Kansas — The test to become a licensed social worker is hard. It takes years of schooling, test prep — and depending on the exam — hundreds of hours of working in the field.

April Diaz, a fourth-year Ph.D. candidate at the University of Kansas, took the test in September and remembers some questions tripping her up, but not because she wasn’t prepared.

“There are questions that I thought if I could sit down with the person who wrote the questions, I could explain to them why I was right, and they were wrong,” she said

Diaz is no slouch, she won national academic scholarships and passed the test by a comfortable margin.

She isn’t alone in her criticisms. The Association of Social Work Boards exam faces calls from across the country to pause the one test all social workers in the U.S. take to become licensed. It’s been called flat-out racist and a barrier to getting people in social work who look more like many of their clients.

Older test takers and Kansans of color fail the test more often than white applicants. In Kansas, the test comes in three different forms for bachelor’s, master’s and clinical certification. In most cases, white test takers passed 20% more often on their first try when compared to people of color or older Kansans.

The test can leave even people who’ve been studying, training and watching pros in the field in action intimidated.

“For people who are trying to pass the exam, I would just tell them don't think about the what-ifs,” Diaz said. “It's OK — just have your slightly problematic assumptions about people to pass the test.”

Test takers aren’t allowed to share questions from the exam. Doing so would give other people an unfair advantage. But Diaz said some questions might ask what a social worker should do first. In reality, the answers were all things that should be done anyway, making the correct answer debatable.

The questions are multiple-choice, but she says some are better suited for short-answer responses.

The Kansas News Service spoke with multiple social work students, teachers, national and local advocacy groups. They were all puzzled by the disparities. Even though they agreed it produced problematic results — a better test would show little correlation between race, for instance, and test scores — but even the critics had a hard time identifying what would make them racist.

Humans are unique, so cultural upbringings could change how each person might answer a question. Students of color usually perform worse on standardized testing, so those issues could be manifesting here. Around 47% of students say their university didn’t even tell them about the licensing exam, so maybe their university didn’t properly prepare them.

Kortney Carr, a doctoral student and associate professor of practice at the University of Kansas, has her own theory. She has seen, anecdotally, that Black people delay taking the test, opting to start working in the field first.

The lessons learned on the job don’t square up with the answers to the test.

“It doesn’t look like the textbook,” she said. “They’ve developed their practice skill set. … And then they take the test, the test is rooted very much in the textbook and how we teach. It just looks different at that time.”

The tests can be expensive, which could make some head into the workforce first. For the clinical exam, someone can only take the test after two years of supervision. That means paying a social worker thousands of dollars to observe them until they are eligible to test, Carr said, adding another barrier to getting licensed. The longer it takes to save money to take the test, the further removed those people are from the classwork that would prepare them.

But those are all theories and the true solution, or solutions, is still unknown. That’s why Darla Coffey, president and CEO of the Council on Social Work Education, wants every state to stop using the test until more can be learned.

Hundreds of colleges and universities have social work students, yet not every university is seeing the same issues.

At the University of Texas-Austin, for example, Hispanic/Latino and white students pass rates for the master’s exam are both above 94%. At Indiana University, multiracial students pass the master's exam more often than their white counterparts. Both schools have disparities in other areas though.

Coffey said she doesn’t want to see students continue to fail a problematic exam until the issues are addressed. She wants states to look into the data, and look at schools without disparities in pass rates, to begin finding solutions.

“We’re not opposed to licensure,” she said, which can better assure capable social workers.

Stacey Hardy-Chandler, president of the Association of Social Work Boards, said the group is looking to root out anything discriminatory.

The group is offering programs to better prepare teachers, publishes a free guidebook that includes sample questions and is working to get feedback from the community about suggested changes. That includes launching the social work census, which will survey hundreds of thousands of social workers to see what they do to gauge how well the exams reflect that.

Hardy-Chandler said questions on the exam now are thoroughly vetted.

The questions are not written by ASWB. Item writers do it. Those writers then propose questions that are then reviewed by a separate team. If rejected, the question is workshopped for possible use later. If that question is approved, it will be put onto the test as a non-graded question. 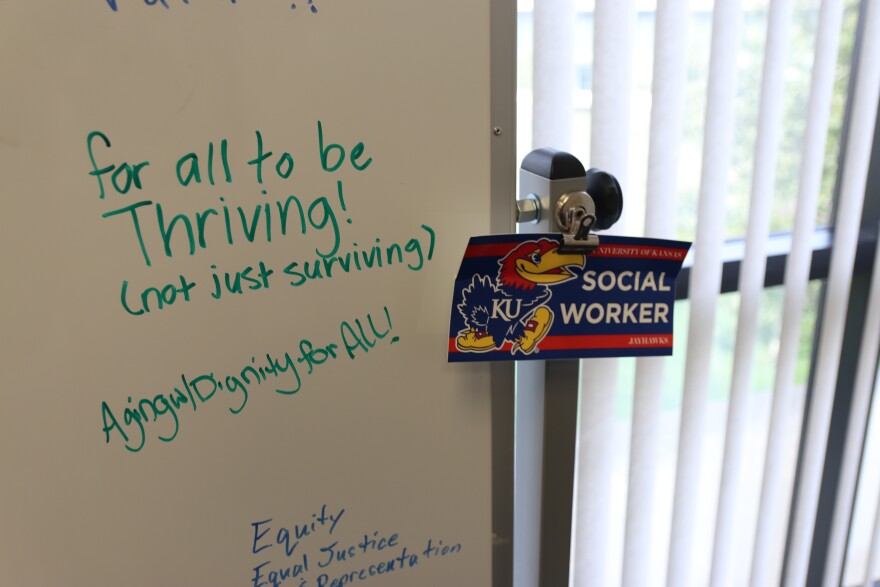 The Kansas Behavioral Science Regulatory Board has almost zero options on how it can move forward.

State law requires Kansas social workers be licensed with a nationally syndicated test, and the ASWB’s test is the only player in this game. Pausing the use of the test would mean leaving more social workers unlicensed, or breaking state law by not having a testing requirement.

But calls for change persist.

Becky Fast, executive director of the Kansas chapter of the National Association of Social Workers, said the state could have more social workers if it didn’t have the current guidelines.

She says Kansas doesn’t need its three levels of tests.

She said the disparities in pass results chase away qualified candidates. Students have already graduated with a degree. She argues that’s proof enough of their competence.

“It's not like you haven’t been passing tests for four years,” Fast said.

Social workers don’t need a license to get a job, but the more desirable jobs usually require a license. Without some licenses, someone could hop over the state’s western border to Colorado, where licensing exams are not common. That person could also leave the field of social work entirely.

In total, 37 states and territories have bachelor’s, master’s and clinical licenses like Kansas. Eight states have just a clinical and master’s license. Two states have a license for just the highest level of expertise.

Carr, the doctoral student at the University of Kansas, said the tests need top-to-bottom changes. Questions could be reworked and surveys of the field could be taken, but problems will arise again if the group rewriting and reviewing questions lack diversity.

“We have to pass this test,” Carr said, “but it’s not necessarily an indication of your practice skill.”