The Pittsburg State University football team will put its undefeated record on the line Saturday in the NCAA Division 2 playoffs. It’s been eight years since the Gorillas made their last playoff appearance and, as Greg Echlin reports, their resurgence has been a boost for fans and businesses in southeast Kansas.

For 35 consecutive seasons, the team had a head coach who’d also been a former player with the Gorillas. But that changed three years ago, with the hiring of Brian Wright.

Not to mention the fact that Mayhew and her late husband were very close to former coach Tim Beck, who won an NCAA Division II national championship with the team in 2011.

“My husband played with Tim, and lived with Tim,” said Mayhew, from her tailgating spot in the Carnie Smith Stadium parking lot. “When my husband passed away, he was one of the pallbearers.”

Mayhew grew up in nearby Coffeyville, Kansas, and embraces the team’s tradition. Her late husband, Todd Mayhew, was an offensive lineman with the Gorillas in 1985 and ‘86. 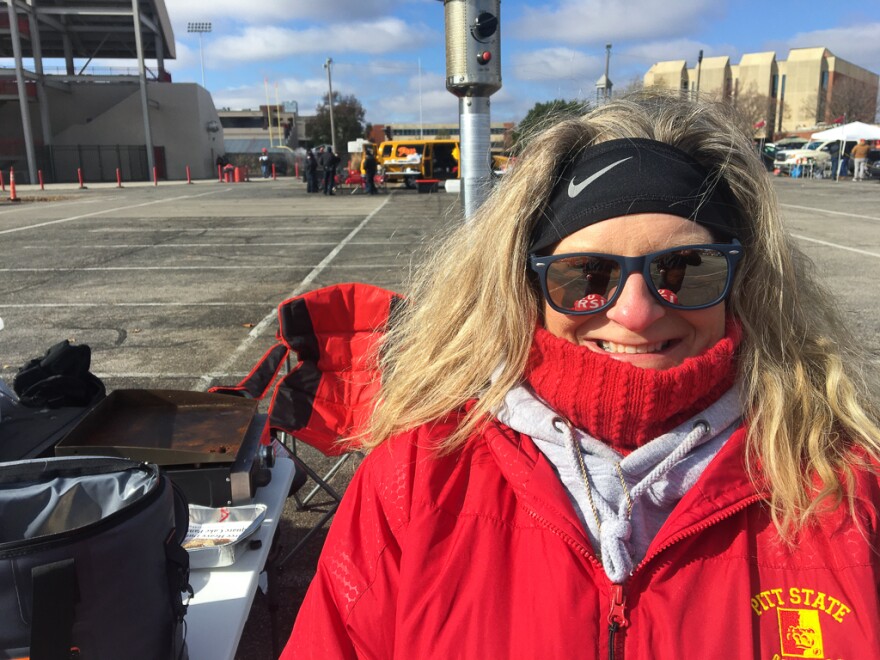 This year, though, the Gorillas were undefeated, and have secured their first playoff appearance since 2014. They’re gearing up for a second-round game on Saturday against the defending national champs, Ferris State of Michigan. The Gorillas advanced to the matchup with a first-round, 35-0 win over the University of Indianapolis last weekend.

The unblemished season has won the approval of apprehensive fans like Mayhew, and has the southeast Kansas community fired up again.

“The whole team is good,” she said. “They’re doing a good job, and working hard together.”

Coach Wright acknowledged the early unrest among a faction of die-hard Gorilla fans after the team’s final regular season game. 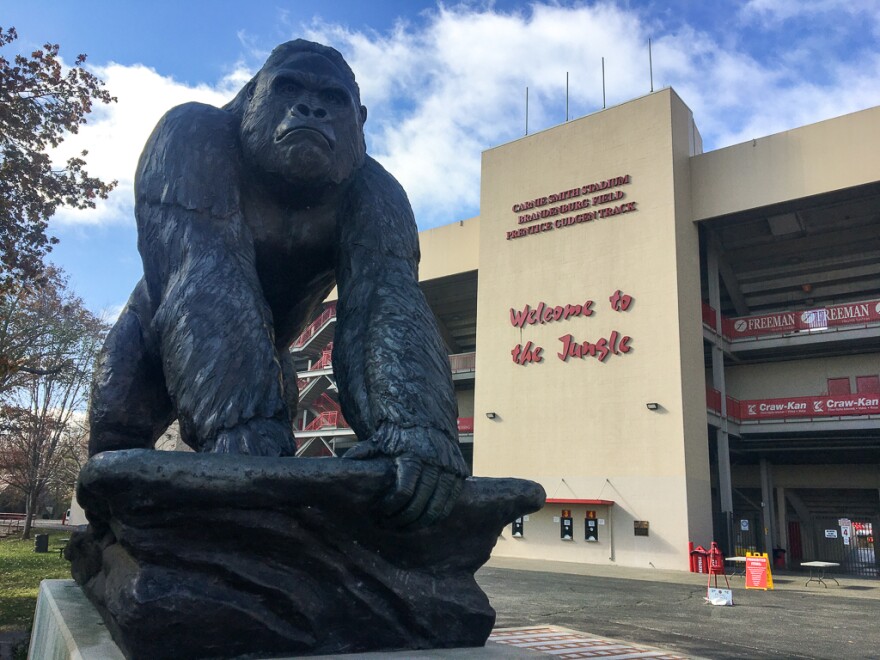 “Anytime there’s change, that can be difficult for people to accept,” Wright said, after the 35-14 win over Fort Hays State.

Wright, who is from Ohio, left his job as an assistant coach with the University of Toledo in 2019 to succeed Beck, who resigned after 10 years as head coach.

Not much could be made out of a 2-2 record during Wright’s first season at the helm, during the COVID-19 pandemic. But there was more optimism after an 8-3 record in his second season.

Looking back on his third year, Wright pointed to the second game of the season as a turning point — when he finally felt at home in Pittsburg and planted the seeds for the first undefeated regular season since 2004. Pitt State had just beaten Nebraska-Kearney, then ranked No. 11. 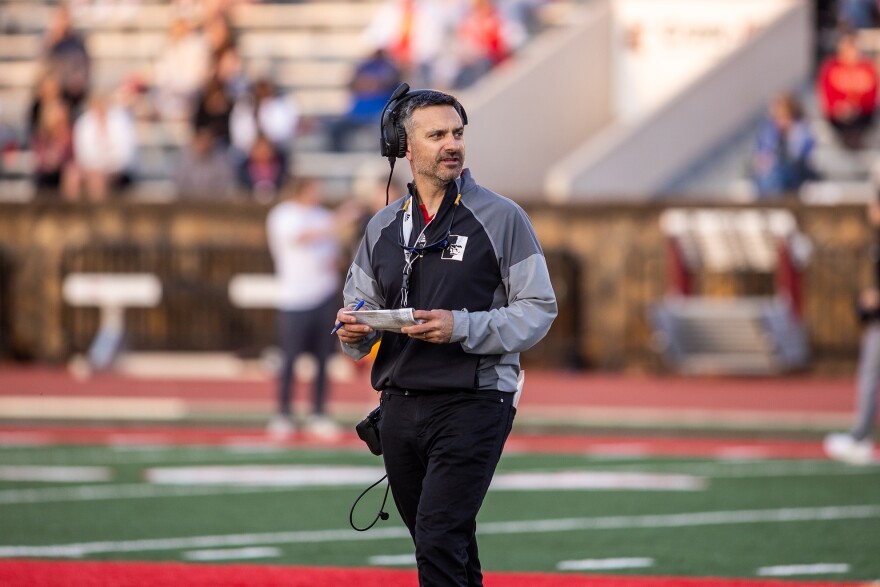 The Gorillas came from behind to win that game when quarterback Chad Dodson Jr. completed a 72-yard touchdown pass to wide receiver Bryce Murphy with 12 seconds left in the game.

As a result, fans turned out in droves at PSU’s Carnie Smith Stadium, and longtime followers relived the days when the Gorillas won their first D-II championship, under Chuck Broyles in 1991.

Duke Palmer, of Olathe, played defensive back on that title team. He attended this year’s regular season finale, and the first-round playoff game.

“I’m glad to see that they’re restoring that old — restoring the legacy that we set forth years ago,” said Palmer, who snatched nine interceptions in 1992 to set a Gorilla record. His team reached the national title game that year, but lost to Jacksonville State, 17-13. 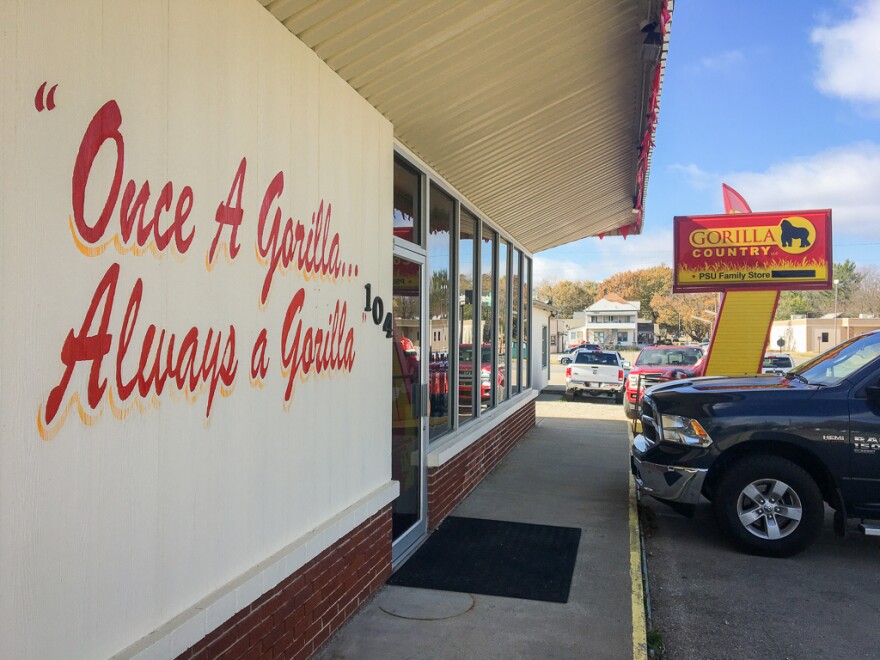 Before a 30-year reunion of the ‘92 team, Palmer was checking out Gorilla gear at a bustling Pittsburg souvenir shop called Gorilla Country.

Behind the counter, co-owner Steve Scott was also feeling confident.

“Pitt State people are a very loyal group, any time of the year,” he said. “We have another new group (of shirts) coming in … then we’re already making plans for the national championship, when we win that.”