Corn, soy, and wheat make up about 70% of Midwestern farmland. But as the planet heats up, scientists are developing new crops to replace them. They're working on developing plants that can survive – and thrive – in a changing climate. Rachel Yang produced this story with the Food and Environment Reporting Network. It’s about one crop that some scientists and farmers think could be the grain of the future.

This story comes from Hot Farm – a new podcast from the Food and Environment Reporting Network about the intersection of agriculture and climate change. You can listen to “Hot Farm” wherever you get your podcasts.

Carmen Fernholz started farming organically in 1972 — before the phrase “organic farming” was really even a thing. And as a lifelong organics fanatic, he’s always on the lookout for strategies to keep his soil healthy.

Many of these strategies are about how he farms: He’s never used herbicides or pesticides on his crops, for instance. He doesn’t use commercial fertilizers. He plants cover crops to sequester carbon in the soil.

Basically, when it comes to the health of his fields, Fernholz’s philosophy is to let the soil live as naturally as possible. “I just cringe whenever I see soil disturbance.”

And for Fernholz, caring for the soil isn’t just about how he farms. It’s also about what he farms. In 2011, he started growing a new type of grain designed to disturb the soil as little as possible. It’s called Kernza. It’s a species of wheatgrass, and some scientists think it could revolutionize grain farming.

Most of the cereal crops we grow now, like corn, soy, and wheat, are annual crops. They’re planted and harvested every year. And the way most farmers grow those crops — with Nitrogen fertilizers and yearly tilling — damages the soil, pollutes the air, and contributes to climate change.

Kernza is different. It’s a perennial grain. Its roots stay in the ground for three or four years, growing up to 10 feet deep into the earth. While the plant above ground keeps producing grain each season, Kernza’s roots pull carbon out of the air, build healthy soil and make Kernza resilient to extreme climate events like droughts and floods. Plus, it produces a grain we can eat — which means farmers can sell it and turn a profit.

Fernholz started with a couple of acres of Kernza in 2011, as part of a pilot program funded by the University of Minnesota. Today, he grows about 80 acres of it, and he says he gets phone calls all the time from conventional farmers who are curious about Kernza as they look for a better way to farm.

“They’re seeing soil degradation, herbicide resistance, increasing costs of production,” Fernholz said. “They’re sort of on a treadmill with corn and soybeans. And they’re looking for something to break out of that.” 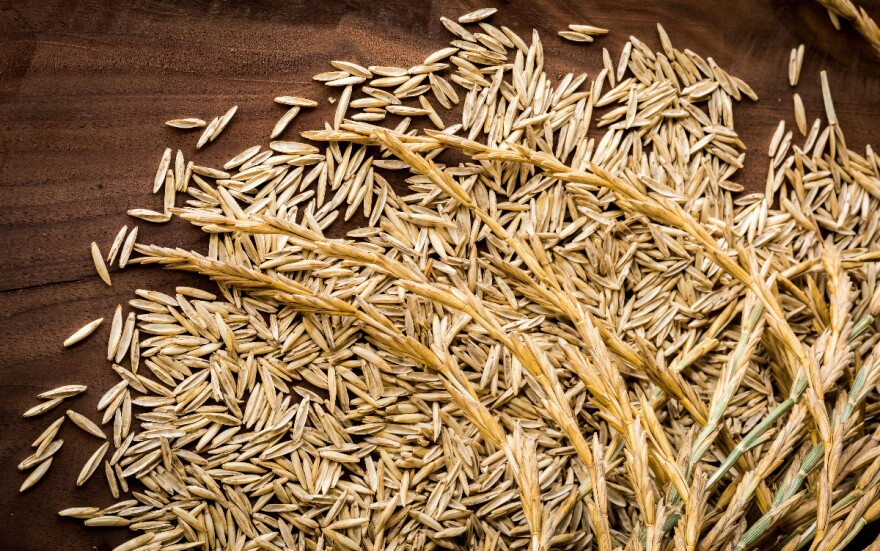 The grain of the future

“People are very excited [about] perennial grains,” said Tim Crews. He’s the chief scientist at the Land Institute in Salina, Kansas. That’s the agricultural research organization that’s been leading Kernza development for the past 20 years.

If 20 years sounds like a long time to be developing a grain, plant geneticists will be quick to assure you that it’s not. Look at annual wheat for comparison — humans have been cultivating it for 10,000 years.

But compared to wheat, Kernza looks and behaves a lot more like the plants that originally grew on Midwestern grasslands. The Land Institute’s goal is to restore soil ecosystems to the state they were in before annual farming came to dominate the landscape. In the Midwest, that happened about 200 years ago, when homesteaders took the land and started plowing it into fields.

Eventually, Land Institute scientists want perennial crops like Kernza to completely replace the annuals we grow now. And not just in the Midwest. Over 70% of the world’s croplands are planted with annual grains, and Crews says they have their sights set on those acres, too.

Perennial crops are the key, Crews says, to a future of farming that actually benefits the earth instead of degrading it. “It’s just a matter of getting them to the point where they can actually start to replace the annual crops economically.”

That means building a market. And, for now, that market is pretty niche, because there are just about 4,000 acres of Kernza growing worldwide. Most of those acres are in Minnesota, which is also home to a small but enthusiastic Kernza supply chain as local brewers, bakers, and chefs experiment with Kernza products — in microbrews, pancake mixes and dessert bars.

National brands are starting to pay attention: Whole Foods named Kernza among its top 10 food trends of 2022. But University of Iowa economist Silvia Secchi says that, for Kernza to actually replace the grains we grow now, we’ll need to see major changes to the U.S. farm bill first.

“You can’t just change the crops,” she said. “This is a whole system that we need to modify.”

That system includes federal crop insurance subsidies for annuals like corn and soy, which incentivize farmers to stay on the corn-and-beans “treadmill.”

And in the era of climate change, that protection is getting increasingly expensive. In the last 25 years, federal crop insurance payouts to farmers who lost crops due to drought and flooding more than tripled. And in 2020 alone, federal insurance subsidies for extreme weather events surpassed $4 billion.

Secchi says that we need sweeping reforms for Kernza to compete with annuals. But subsidies are one place to start. “If you have crop insurance subsidies for corn and beans,” she said, “you should have them for Kernza.”

But Carmen Fernholz isn’t waiting for policy to catch up. For him, Kernza is exciting not only because it’s better for the earth, but also because he hopes it can give more farmers a viable entry point to grain farming. In the last few years, he’s been handing over the reins at A-Frame Farm to a young organic farmer who shares his commitment to soil health and rural communities.

“To start seeing the next generation being engaged in it?” He shakes his head. “There’s nothing more rewarding. Not at all.”

This story was produced in conjunction with the Food & Environment Reporting Network. Follow Rachel Yang on Twitter @rachelayang. Her story comes from the new podcast Hot Farm from the Food & Environment Reporting Network. This story was produced in partnership with Harvest Public Media, a collaboration of public media newsrooms in the Midwest. It reports on food systems, agriculture and rural issues. Follow Harvest on Twitter @HarvestPM.