More cities are looking to make big investments in solar power to combat climate change. But that raises the heated question of where exactly to build a solar farm large enough. Carlos Moreno reports on how one such project is splintering communities outside Kansas City.

Frank Gieringer rides a flatbed trailer toward rows of apple trees loaded with Galas, Crimson Crisps and other varieties, ready for the picking.

His family owns this bucolic orchard and berry farm outside Edgerton, Kansas. Just beyond its borders lie 2,000 acres of land, a potential location for the state’s first utility-scale solar farm.

“To really look at ‘em, it’s not a heck of a lot of difference than looking at an orchard or a vineyard really. It’s just rows of panels,” Gieringer says. “They’re harvesting sun. Same thing I’m doin’. All of agriculture sells the sunshine.”

For years, the Florida-based company NextEra Energy Resources has been talking about building a solar farm that would span Johnson and Douglas counties. But it wasn’t until this spring that both county commissions passed regulations allowing the process to move forward.

If built, the West Gardner Solar Project would be the largest in Kansas — generating 320 megawatts, enough to power thousands of residences and businesses.

But not everyone agrees that’s a good thing. While some people are eager for Kansas to fully embrace renewable energy, many residents say they don’t want the countryside — their countryside — turned into industrial sprawl. 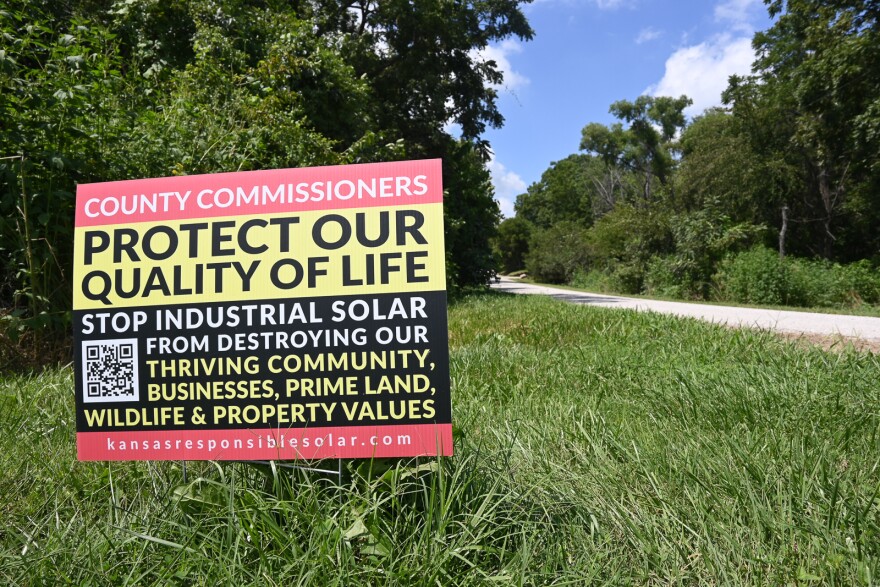 Carrie Brandon, who lives near the proposed project in Johnson County, is one of the most vocal opponents of the solar farm. A member of Kansans for Responsible Solar, Brandon is skeptical of nearly all facets of NextEra’s plan, and has pushed back against permissive solar regulations in Johnson County.

Brandon says she’s suspicious of the connections between the company and county commissioners.

“It just feels like it’s all interconnected,” she says. “This big-boys club going on and girls club. It’s all behind the scenes. It just smells of a lot of underhanded dealings.”

In Johnson County, the solar panels must be located at least 1.5 miles from a city’s boundaries. In Douglas, the only setback requirement is for the panels to be at least 500 feet from residences.

Brandon and her group argue the process is moving too fast, and that they would rather see a smaller, more restricted solar farm first.

“Keep in mind, this is new. This is all new,” Brandon says. “Never in the history of mankind have we ever blanketed populations with 2,000, 3,000 acres of utility-scale solar. It’s always been in the middle of the desert and things like that when it’s been done.”

Solar companies say they need to build farms of this size to produce enough electricity for urban areas and store energy for peak demand periods. And the farms need to be close enough to their customers to efficiently deliver the electricity. 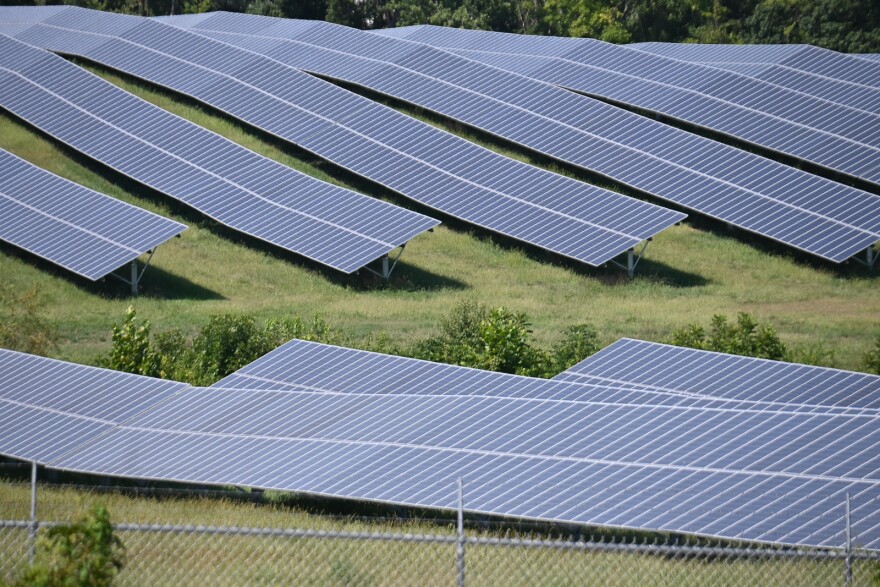 Kansas City is even talking about constructing a 3,100-acre installation near the airport that could produce 500 megawatts of electricity. A recent feasibility study found the utility-scale solar farm could power a third of Kansas City’s homes, although it did not outline a timeline for construction.

His vineyard and winery sit a half mile down the road from Gieringer’s orchard. Fuller says he’s researched different green technologies and has considered adding solar panels to his own buildings.

“But when you have a huge company coming in and doing this stuff behind everybody’s back — and I’ve been in business long enough to know that any company as a business has a bottom line,” he says.

Fuller has a list of concerns beyond project size: soil erosion, noise from the battery storage, herbicide applications, property values. Fuller says he worries about what happens after he’s gone and his children decide if or when they might sell the land.

“You cannot tell me that if somebody’s hunting for a place to build a house," Fuller says, "that they’re gonna drive around and gonna say, ‘Oh I want to build a house right next to that solar farm.'" 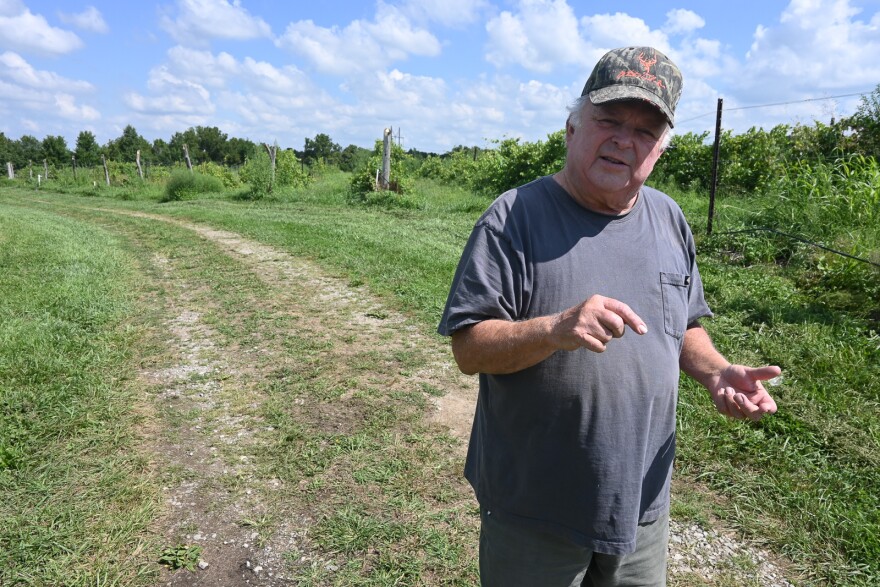 “They can remove those solar panels 30, 50, 70 years from now and you can easily then do something very different with the property,” he says. “It’s not like there’s a giant, four-football-fields of asphalt that have been put down.”

Svaty says a solar farm is a better neighbor than other industries or residential construction.

“With the growth in Johnson County, what’s currently there will not exist 10 years from now anyway,” Svaty says. “It’s going to be used by something.”

Karen Willey sat on the planning commission that passed the solar farm regulations in Douglas County. She’s anxious to see how solar farms and agriculture might find a way to co-exist.

She says the public needs to take responsibility for the increasing amount of electricity that communities demand. That means moving away from reliance on the fossil fuels that cause climate change.

“It’s hard. Change is hard,” Wiley says. “And the only alternative to that, though, is to continue with the environmental devastation that comes with coal.”

To sway more people to solar’s favor, Wiley says she’s banking on education, partnerships and improved technology over the coming years. But she also says she wished the solar companies had sent representatives to talk to the community during the public hearings.

“They would send attorneys to answer attorney-like questions,” she says. “What we really needed were engineers and site project people who could answer more specific, on-the-ground questions.” 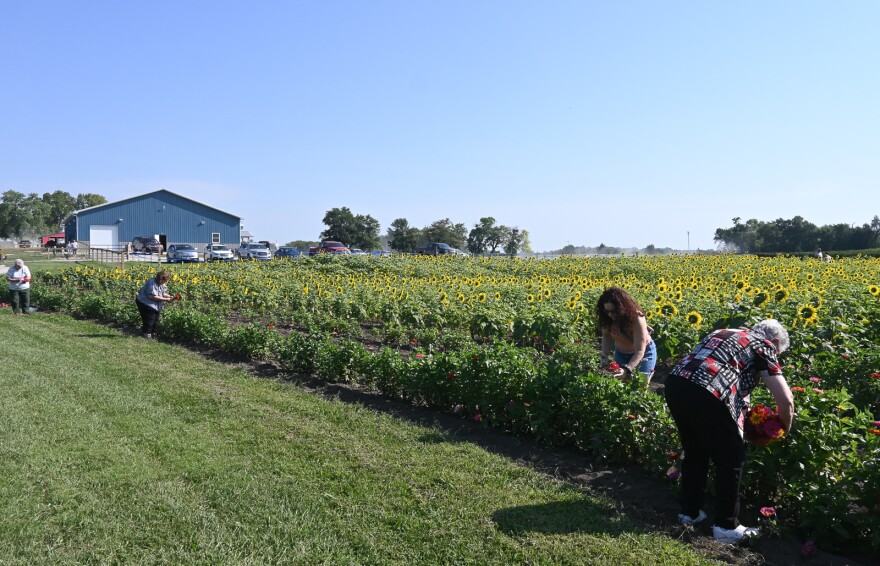 NextEra has yet to formally submit an application to start building the West Gardner Solar Project. The company says it’s examining the new frameworks in Johnson and Douglas counties, and will hold public meetings to talk directly with community members.

If the solar farm moves forward, Gieringer says he hasn’t decided yet if he will join the others who’ve already signed options for leases. But he has visited other solar farm sites and seen how they fit into the landscape.

“There will still be creeks and trees running through these solar projects,” Gieringer says. “I don’t know if that’s anything to really be upset about.”

The Kansas News Service is a collaboration of public radio stations, including Kansas Public Radio, KCUR, KMUW and High Plains Public Radio - dedicated to reporting on the health and well-being of Kansans, their communities and civic life.  Learn more at ksnewsservice.org.